My first term at Columbia (and LISPA) is now complete. The last week we presented six different final projects ranging from solo material to devising with all 17 people from our groups, visual art to singing, pure abstraction to technical organization. Now that I get to slow down over break, I want to take advantage to reflect on my personal journey through this term. My hope is that it speaks to some of those who want to pursue this adventure, or if you’re experiencing something similar then you’ll know you’re not alone. 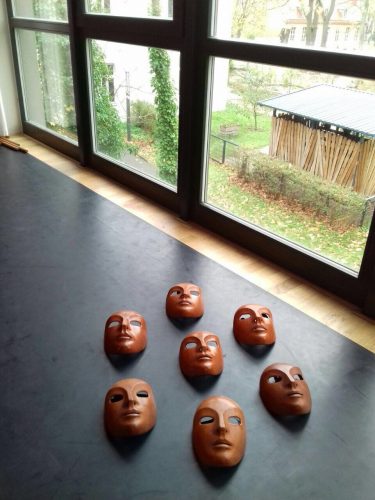 I feel like I’ve felt every emotion in the last two weeks. They’re still present, but dulled. I’m an overflowing pot of information. I can’t possibly take in anymore… yet I still want to. Everything I’ve learned and experienced is a series of time bombs waiting to explode in the next assignment, sending more artistic and personal realizations shooting through my brain. I feel both like a loaf of bread in the oven waiting to rise and the child that’s impatiently waiting to eat it. I wish I could shut out the world and grate cheese for a week so that maybe I could more quickly process everything, but instead I’m going on an epic winter adventure through central Europe. Poor me.

This term has held a lot of discoveries and shattering of expectations for me.

Having had previous devising experience coming into the program, I welcomed the projects and thought of myself as a thoughtful and giving collaborator. Every idea I had about myself was challenged when collaborating with an international group. I became frustrated that my devising groups talked excessively before taking action, and I realized I was a common thread in these groups. I also realized how much I value words to express ideas, but the shared language we have is physical expression. Talking about an idea or disagreeing with one before it was put in the space gave a bigger advantage to native-English speakers in the group. I took advantage of that a lot in the beginning of the term. In hindsight, there were many times when I acted like a negatively stereotyped American in the devising groups – pushy, loud, and opinionated. Unfortunately, realizations don’t break habits instantly, but I have made a conscious effort to play instead of speak when creating content.

Some celebratory things have surfaced, too. When I entered the program, I thought of the word ego with a negative connotation. I thought of myself as a collaborator who put the ensemble first, and I was constantly surprised and eventually hurt when no one would give me the acting role that I thought I was capable of playing. Now I’ve come to think it is both important and necessary to have an ego AND put the ensemble first. I have my 17 person half-group to thank for this. We are a group of strong voices, and defending my ideas helped me to develop a voice of my own. I discovered that I should not expect my ensemble to give me a role, just as no one would hand me a role in an audition. I have to take the space. I have to make a proposal with confidence, and be willing to accept that the group may love it or hate it.

I have spent much of my career and this term investing in my ideas, and now I want to invest in myself as a performer.

Every journey through a performance-based masters program will be as unique as the person who experiences it. Another blog post about my creative reflections in three more months very well could be a copy and paste of this post with red strikethroughs and a punctuating ‘NOPE.’ Graduate school provokes, asks questions, and makes you identify the questions you want to keep pursuing. I’m excited for the growth to come in the remaining five-sixths of my academic studies, and I’m happy to be exactly where I am.