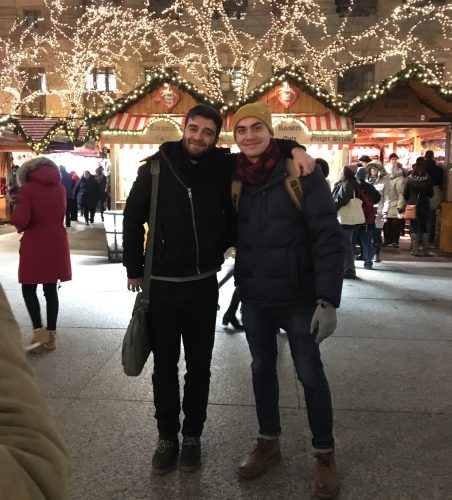 Me (on the left) and my classmate Nick (on the right) in the Christkindl Market.

Our final projects of this semester are over. We finished a fine cut of our films and had a screening for the Cinema and Television Arts faculty members. Now we are ready to move on to the next semester with the feedback we got from all of our professors. It is also time to celebrate the holidays and the New Year!

All of the Cinema Directing students survived this semester and ended up with great films. It is still hard to believe that 5 months have already passed. Although the time passed so quickly, looking back, I have learned so much. I majored in Radio, Television and Cinema during undergrad in Istanbul, but working toward my master degree at Columbia College Chicago has pushed me. I have never been involved with so much filmmaking.

Again, I am reminded how stressful filmmaking can be. I was one of the last ones to shoot the final project. This means that I had more time for pre-production but less time for post-production. Initially, I was happy with this. I have learned here that the more preparation, the smoother the shoot. Unfortunately, I had many serious problems with casting and location. It was a really stressful time for me. In the end everything worked out. I found a great location with a reasonable price and borrowed props from classmates. My location of the final project titled “Friday”. 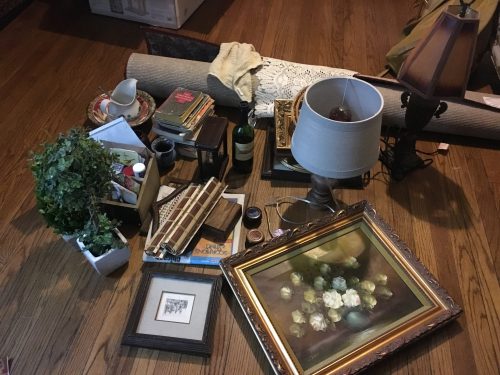 Part of my props that I borrowed from my classmate for my final project.

After the shooting and editing was over, we all had our fine cuts of our films ready to show them to the faculty members in order to receive their feedback. We had the screening in a theater room in the 1104 S. Wabash building. It was to great to meet new film professors at Columbia and learn from them. It was especially nice to meet some of our future teachers for next semester, such as David Tarleton.

Outside of school and other filmmaking, I am having a great time in Chicago. Many exciting holidays are coming up and Thanksgiving was not long ago. Thanksgiving is not a day we celebrate in Turkish culture, but as it neared, I began to hear from friends that they were either going home or making other plans. Days like these are emotional because they remind me of my family and special days in my own culture. Well, my friends did not allow me any time to dwell on this because they invited me to so many different gatherings for Thanksgiving. First, we met at one of our producer friend’s house and had an amazing time. Soon after on Thanksgiving day, one of the directors organized a gathering at her house and I joined in on the celebration. Both events were so fun, I enjoyed both so much. It was a much needed 1-2 day break from all of the stressful productions and assignments. Some directors and producers are celebrating Thanksgiving.

I was also able to join the ZooLights event at Lincoln Park Zoo. It was great to see all those different lights and also animals! Lastly, I went to the Christkindl Market organized by German American Events, LLC. There were different kinds of Christmas items, food and drinks there. Chicago is one of the best places to be during the Christmas season. I could join only some of them and there are different kinds of events happening all around Chicago.