Today is a big day.

This is the day the Columbia cohort has been prepping for, researching about, and stressing over since we got our acceptance letters.

This is the day we get our student visas…hopefully.

Along with any exciting adventure, there lurks the counter-mask: the administrative side. I hope this is the least entertaining blog post I will need to write this year, but, like the visa process itself, it’s a necessary one.

The two major questions I had after being accepted into the EDPP program were:

What can I do to prep for getting my visa while I’m still in the US?

Collect and notarize the following paperwork:

-Bank or loan statements proving that you will have 1000 euros per month in the time you will be here (optional: a letter from a third party stating they will financially support you)

-Proof of insurance that Columbia provides

The official detailed list can be found here: http://www.berlin.de/labo/willkommen-in-berlin/dienstleistungen/service.271950.php/dienstleistung/305244/en/

There was no need to fret about the “Proof of Main Residence” one – that happened after I arrived.

How do I find a place to live?

My advice is to book an Airbnb for a month. After I arrived, I got the feel of a few different neighborhoods and began looking for a more permanent place without the fear of being scammed online.

Getting Into the Country

The same paperwork needed for the visa would have gotten me clearance into the Republic of Germany. However, these papers NEEDED to be printed. I, very stupidly, thought having mobile versions of my documents would suffice, and they probably would have had I not booked a one-way flight. The airline employee at the ticketing counter would not allow me on the plane until I purchased a return flight, which I cancelled within 24 hours and had refunded.

It was easier and cheaper to find housing for an individual than it was for a group. My two flatmates/cohort members and I went our separate ways after struggling to find a permanent place together. Our cohort found the best house-hunting options to be Woholo (a weekly email newsletter with ads for people renting rooms), Facebook groups like WG-Zimmer and Wohnugen Berlin, and WG-gesucht.de – a website where you can respond to housing ads and post an ad about yourself.

Now let’s circle back around to that Proof of Main Residence I mentioned earlier. Before signing a lease, I needed to be sure the landlord would sign a form called…

It sounds complicated, but this form just tells the Berlin government that I have a permanent living address. Finding a landlord to sign this form was the most challenging part of the visa process since none of us have any credit history in Germany.

Once we had this paper, a translator with LISPA went with us to the Bürgeramt to register our addresses with the government. This process is called “Anmeldung,” and every Berliner must do it. A stoic government employee gave us each a stamped paper that officially completed our visa requirements.

After the jet-lag, the searching, the waiting, the fretting, and getting my Anmeldung, it was time to apply for my student permit.

I left my apartment at 4 a.m. to make sure I arrived at the foreign office around 5:30 a.m., where I was greeted by a queue already 70 people long outside the building. At 6 a.m. security checked our passports, handed us a ticket, and ushered us into a waiting room. All of us sat for an hour until the office opened, and then we waited another two hours for our ticket number to be called to hand in our paperwork. We were then handed another ticket, which was our official number for our visa appointment. Then we waited. And waited. And waited. At 1:30 p.m. my number was called, and I went in to the office with the translator. They handed me my passport with the visa, a bill for 56 euros, and I was free to go!

The visa process is truly stress-inducing. After I had all of my paperwork, I still had the fear of being kicked out of the country. From my experience, though, it is entirely possible to get the whole thing done within 90 days if you stay on top of it, and the LISPA staff are super supportive. Now that it’s done, I could get a German bank account, a phone contract, or a part time job if I had the time and energy. More importantly, I finally feel like I can settle into my new home for the next seven months.

….and my passport looks awesome. 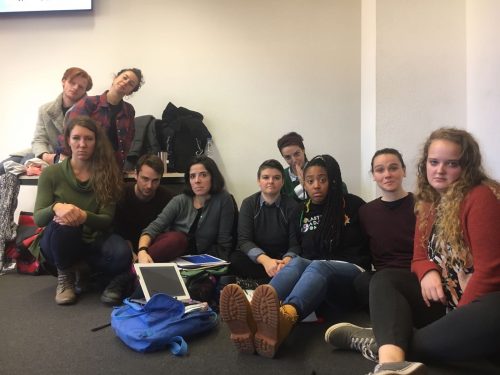