A director shooting her short film for a class project.

Our cinema directing adventure is going with full speed. We have finished shooting our first projects for Directing for Character class, “baby adaptation.” All of us became crew members for each others’ shoots. Tough but joyful shoots are over, now it is time to concentrate on our “final projects.”

For our final projects we had a great exercise in our Directing for Character class. We all dressed up as our protagonists and came to a “dinner party.” There were two people chosen as hosts. All ten of us dressed and behaved like their main characters for an hour. It was a great experience because we discovered different things about the characters and some even thought about making changes on their scripts. Besides, it was a fun experience to be someone else for an hour. Because our class is so diverse the characters that people had in their scripts were very different than each other. Pushing my protagonist to talk to another character allowed me to see new things about the character. 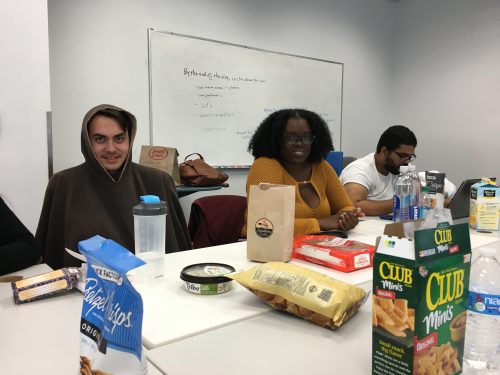 Directors dressed as their characters. (A TV addicted character on the right)

After completing the pre-production all directors started to wait for their shoot. Actually, there was no time to wait for anything since we were all working in each others’ sets. Even so, we were all excited for our shoots. After three weeks of pre-production process it was the time to go to set. As a film student, at some point in our lives we bring some equipment to our own houses, it can just be an SD Card but it can also be the whole equipment package just like what happened to me. 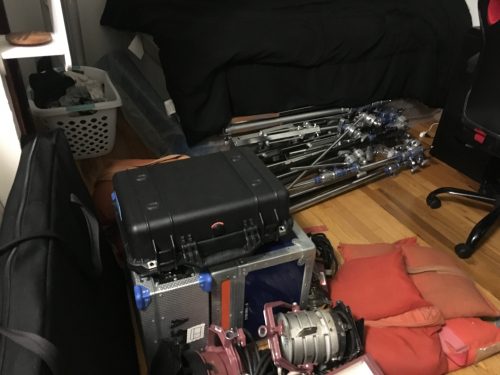 Equipment for my short film was stacked to my house. (My laundry basket on left)

In the end, we were able to finish all of our shoots with success. Then in Directing for Character (taught by Sue Mroz) and Editing Theory and Practice (taught by Bonita Winer) classes we showed the dailies. And also a week later, we showed our rough cuts, and it was great to see how all they came along. Now, we are ready to focus on our final projects which are the next short films we are supposed to shoot. Nowadays, it is possible to see directors and producers having meetings all around campus. Pre-production has already begun and one of our classmates is going to be shooting his film this weekend and I am going to be the AD (Assistant Director) on his set. It is great that we get different roles in each others’ sets, therefore we are able to see different departments of filmmaking. I am also going to be working on other sets too, and I am not just excited for my short, but also very excited to do my best for my classmates too. In our classes, and even after classes, we try to help and find the required, missing things for each other.

Next time, I will be coming up with our final projects, stay with me, more productions are on their way!