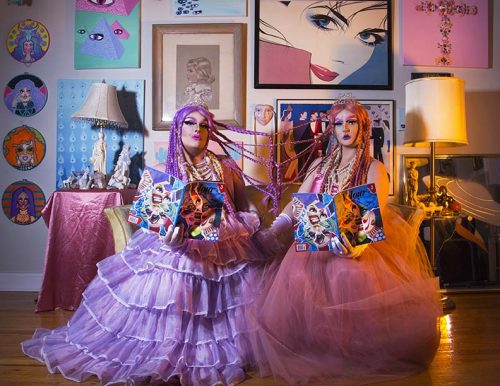 My roommate and drag mother, Valentine Addams, and myself, Kelly Boner, in an advertisement for issue 3 of Velour Magazine

I came to Columbia College Chicago with a purpose: to learn the business skills I desperately wanted to become a leader in the arts, but also to raise my ability as an artist and an administrator to benefit the Chicago drag community. I’m starting to spread my tendrils into all the avenues I can to find more and better ways to push drag as its own high art in the Chicago community, and to benefit the performers and queens I’ve gotten to know so well throughout the years. So, during my tenure as Graduate Ambassador you can expect me to write a lot about this topic.

As an ongoing theme for this blog, I would feel remiss without touching briefly on the history of drag. The origins of drag are debated heavily and there are two takes I’ll pay forward for you, the dear reader, to digest. The tradition of drag goes back to ancient Egypt and Greece. The origin of the term “drag” is disputed, but some say it started in Elizabethan times when women were not allowed to perform in the theater. Men were cast in women’s roles, called D-R-A-G: dressed resembling another gender. Another take on the origin of the word is that it referred to the kinds of costumes these men wore on stage—often Elizabethan—with long trains that would drag on the floor. And musician Dorian Electra covered the history in her song 2000 years of drag, with a video created for Refinery29:

Regardless of the origin of the word, a lot of conceptions of drag as it stands today are rooted in the history of queer people of color. One of the most formative documentary works about drag and queer communities and the performance of gender and identity is the documentary Paris Is Burning, released in 1990. The film explores drag ball and family culture among queer chosen families in 1980s New York and has brought us some of the most iconic drag lines that many drag fans know and use today.

I reference the film mostly because I believe it does a disservice to think of drag as purely defined by its oldest roots or its most prevalent contemporary reach (i.e. as being solely defined by Rupaul’s Drag Race). Paris is Burning is one of the best cross sections of the ways drag can transform your life if you embrace it as the transcendent, all encompassing, identity-shaping, beautiful, monstrous, budget-ruining art form that it is. Drag is gender; drag is life; drag is shaping who you are; drag is living the fantasy. In all fantasy worlds made possible through drag, participants can look how they want, be who they want, and try to create the world they want. The fantasy represents your innermost childhood dreams and encapsulates your ideal form of gender. The fantasy is the world you wished you lived in and your passion in creating your vision in the world you were given. It’s a place of respite, escape, and joy for the gay, transgender, queer, and glamour-loving participants of drag. And it’s also, in my worldview, one of the greatest extrapolations of the artistic point of view, as it requires you to envision new characters who would live in your fantasy world.

To come back to earth regarding the intersections of drag artistry and my Columbia experience so far, currently I am helping the Student Programming Board book a drag show on October 20, over Columbia weekend. I’d reveal the lineup but it’s still in the works. All I know is that I’m excited to bring the performers from my nightlife into my academic life and to see how they mix with the students of both. I’ve also written up a semi-comprehensive Chicago drag show rundown for my cohort in our Facebook group, and I plan on revealing that recommendation list in due time in this blog. And finally, I’ve got a 2018 project brewing about Chicago drag that I hope will knock the socks off of all participants, and I’ve only begun the brainstorming process. Big thanks to the motivations of my classmates and my faculty mentor on that one, and we’ll see where the process goes from here.

There’s so much to love about drag and its history that I could wax poetic for endless blog posts, but in the meantime:

RuPaul Charles and one of his favorite catchphrases