I am back from a bit of an extended hiatus after attending Haystack Mountain School of Crafts in Deer Isle, Maine for the past two weeks. Though it seems like a short span of time, it feels like it was much longer–due in great part to the amount of new skills, relationships, and experiences I acquired over this period. To give you a better idea of what this intensive time was like, I will attempt to provide a brief chronology of those two weeks in this space: A view of the ocean from the rocks at Haystack.

I was fortunate to be on the same flight into Bangor, Maine as one of my fellow Columbia students, undergraduate Fine Arts student Aaliyah Sims. Although this was our first time meeting, we got to know each other quite well during our hour-and-a-half shuttle ride to Deer Isle. On this ride, we were also joined by future classmates but couldn’t yet imagine how our relationships with these individuals would evolve in just a matter of days.

On arriving at the school, we were escorted to our cabins (interior pictured below)–a wholly new environment for me as a person who never attended a sleepaway camp–and soon thereafter welcomed to the campus and told its history by Haystack Director Paul Sacaridiz. My “bunk” at Haystack.

That very evening we had our first (amazing) dinner of many locally-sourced, delicious meals (a subsequent morning’s breakfast pictured below) followed by an orientation and–right away–our first class of the session. My workshop started off at full speed with our exchanging personal background information, creating goals for the class, and getting set up on sewing machines. I should note here that I had never operated a sewing machine before this date and my sewing experience up until that point had been quite minimal (perhaps sewing a button or a 2-inch running stitch, for which I’d never known the name before), so the days to come were a whirlwind. 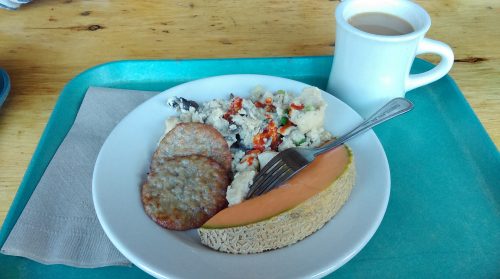 One of the countless wonderful meals at Haystack.

Over the course of the first week, we were introduced to varied and multi-cultural piecework traditions and techniques, supplemented by daily reading and writing exercises, discussions, demonstrations, and copious printed reference materials. It seemed that as soon as we’d introduced one approach and history of piecework, we were onto the next. And, novice that I was (and still very much am), I found myself in the studio from before the time instruction began until dinnertime on most of these first days, trying to absorb and apply everything that I was learning. Among other traditions, we learned techniques from crazy quilting and Indian kantha to Korean pojagi and Japanese boro.

All the while, we were learning so much about each other as classmates, peers, and instructors, beginning with slide sharing on some of our first few nights together. Working toward culminating projects of making “personal” flags and, subsequently, soft sculptures, we took a trip as a class to the dump and thrift stores located in the more populous areas of Deer Isle. Further, we seized every additional opportunity to bond as a class, from marching in the town’s 4th of July parade to swimming in the frigid waters of the Atlantic.

The only word I can think of to describe the craft school experience that I had is “immersive.” I felt deeply rooted in a community and tied to people I had known for only days, and yet–somehow–it felt perfectly natural. It should come as no surprise then that I was choked up as it all drew to a close in providing a summation of my time to my class. 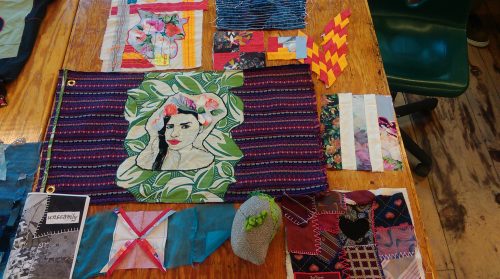 A sampling of the work I produced during my workshop.

It’s perhaps more than I can process right away, but I do feel confident that this experience will serve to inform the work that I make in the years ahead. Opportunities like this one are rare, and I look forward to embracing more of them whenever and wherever possible! Until we meet again, Haystack!