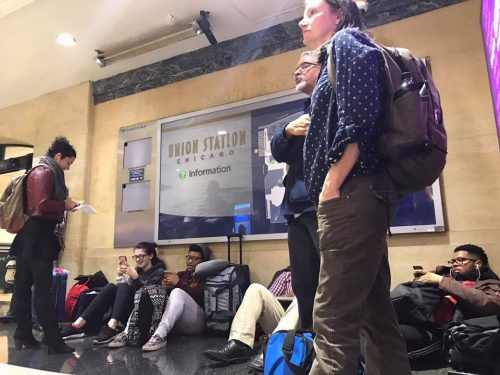 Us, along with Curtis Lawrence and Jackie Spinner, waiting in Union Station to board our train. Photo by Xueer Zhang.

It is a tradition for graduate journalism students to make the pilgrimage to Springfield, IL, the state’s capitol. There, we sat in on committee meetings and hearings, hunted down senators and representatives, and met with some key players in the game of statehouse reporting.

The trip isn’t just a companion to what we learned during the semester, it’s a firsthand look into how legislature passes.

We took the Amtrak into Springfield Monday night and were immediately thrust into the struggle of finding food in the small town. By the time we got to our hotel around 9pm, most restaurants were closed and there wasn’t a convenience store in sight. But, we persevered until we found a dope little mom & pop pizza place. We’d definitely need the fuel for the coming day.

Our first official day started with a meeting with John Patterson, spokesman for Senate President John Cullerton. With an awesome follow up with Monique Garcia, statehouse reporter for the Chicago Tribune at the end of the day, we were given an inside scoop on how information flows out of the state capitol and what challenges exist. In between those two mines, my classmates and I were let loose to roam the capitol, go to meetings and meet with our legislators. 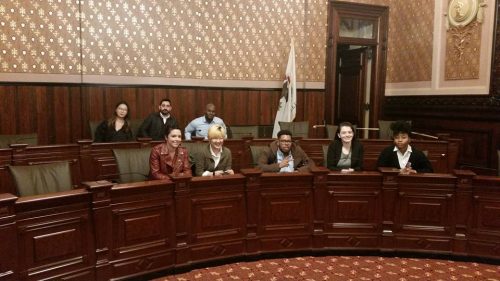 My classmates and I casually taking over the government. Photo by Curtis Lawrence.

Our first steps were to find the senators and representatives we had been in contact with my phone and email all semester. Of course, the majority of them were busy. For many of our beats, committee meetings were changed to budget hearings in response to Gov. Rauner rejecting the most recent bipartisan deal presented to him. There was audible frustration and despair in the Senate Education Committee meeting. For nearly an hour, Sens. Jennifer Bertino-Tarrant, Sue Rezin, Andy Manar and the rest of the committee went back and forth with Illinois State Board of Education Superintendent Tony Smith on what recommendations the board would make in a worst-case budget scenario. Smith said, repeatedly and quite bluntly, that he was there to advocate for full funding and full funding only.

The two sides, advocating for the same Illinois students, were a rock and a hard place, caught between highly likely hypotheticals and the decision everyone wished they could make–full funding, sans cuts. This was the impasse in many a committee meeting: the struggle to start from the ground up, again, feeling dejected and like their hands were tied. It was a reality check to see that everyone’s “budget concerns” were very real, nearly tangible issues that affect taxpayers, the elderly, students, and parents every day.

Wednesday was a little more of an adrenaline rush. After a lesson in advocacy and breakdown of how the complexities of education covered nearly all of our beats from Jim Reed at the Illinois Education Association, we had less than an hour to prep for our 10-minute meeting with the Senate President. In a crazy turn of events, the meeting was postponed and then un-postponed within minutes. In the end, only my classmate Sam and I ended up meeting with Cullerton for literally seven minutes–three questions–we’d only prepared two. So we needed a kicker. Sam Stahl and I meeting with Senate President John Cullerton. Definitely the biggest rush of the trip. Photo by Jackie Spinner.

“What does what Chance the Rapper did mean to–.” Before I could finish, Cullerton dove in: “Chance the Rapper destroyed the governor.” With a smile on his face, he went on to say how great it was that Chance has three million Twitter followers, under and just over 25 years of age across the nation and overseas, who listened to him tell Rauner to “do his job.” The baby political junkie in me was jumping up and down uncontrollably by then. After that, it was nothing to camp out outside of Rep. Juliana Stratton’s office to talk about a bill that would eliminate expulsion as an option in state-funded early childhood programs, or talk to parents about what they really need for their children and for their families.

If nothing else, the trip put faces and bodies to the people in the watchtower, the ones who are making laws “for” us and, hopefully, with us in mind, the people whose motives we often question. It was a trip I’d like to make at last once or twice more and, definitely, a trip my classmates and I will never forget. 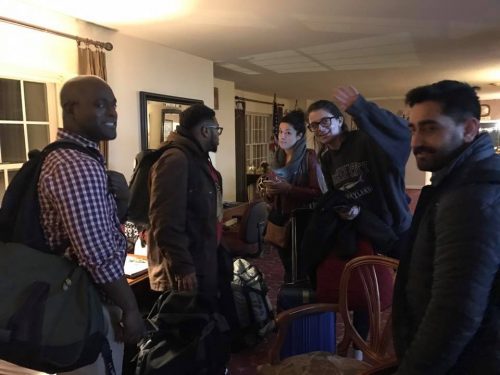 Us, minus me, ready to load up and head back the train station after two days of real-life politics. Phoo by Xueer Zhang.