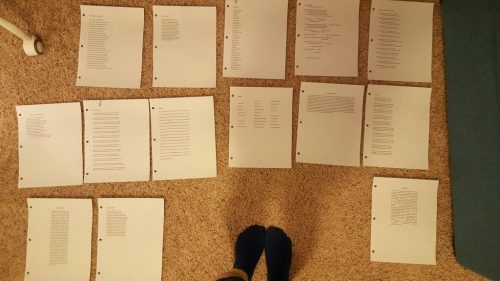 I’m not sure when it happened, but at some point in the graduate school application process, I came up with the right response to family and friends asking why I was pursuing an MFA: to become a better writer. It didn’t quite answer questions about jobs and money, but it deflected them in a way that let me lead the conversation. While I think that we all pursue the MFA to become better artists, there is so much more we learn along the way. I have become a better reader, editor, and teacher. As I look toward working one-on-one with my thesis advisor in my final semester, I keep coming back to one thing: assembling my thesis.

Whether learned organically through the thousands of poems I have read in the last three semesters or discovered through essays we read in Thesis Development, I feel like I have picked up a thing or two about the different ways one can assemble a book of poems. Of course, that doesn’t mean I have a single clue about the right way to order my manuscript. As I piece together poems already written and sketch out ideas for a few new ones, the prospect of a guiding structure to it all feels further and further out of reach. Whether you’re assembling a collection now or will be in the future, I figured I would share some thoughts on organizing your manuscript in that I may help you out and find a better way to sort my work from the last two years.

While it’s not true of all books, a great many are divided into sections as an organizational strategy. Sectioning offers the reader a place to take a break for reflection or to return to the poetry later; it also makes it a bit easier to organize the manuscript as a whole, as it allows you to think about the book in terms of a few sheafs of poetry instead of dozens of poems. That said, sectioning isn’t so much a method of organizing your book in the way that sorting your poems chronologically or by speaker or some other method are, and each section will still need to be organized in a way that you think would appeal to a reader. 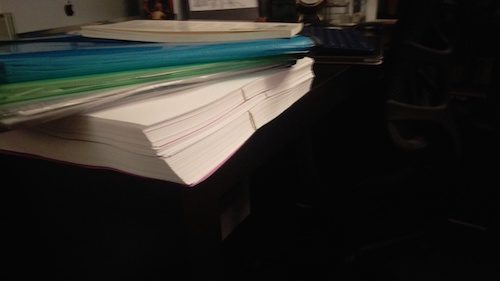 My ever-growing pile of poems and papers

After reading a half a dozen or so essays on the subject of organizing your manuscript, some methods naturally blurred together, with the standouts being the ones that sounded positively ridiculous (alphabetical by poem title) to those that seemed potentially helpful when I have a few dozen sheets of paper spread out on my apartment floor. Three of them have stuck in my head as I write and revise poems in preparation for my thesis:

Above all else, the most important thing is to simply put it all together. Worry about sorting it all out once you have the poems in front of you.