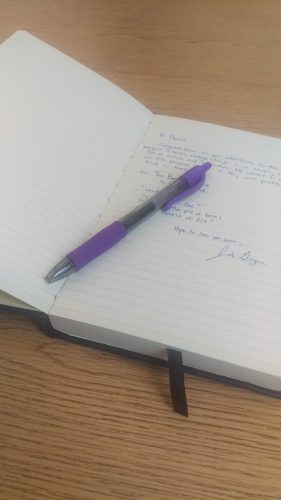 My notebook that goes mostly anywhere with me, with an introduction (and welcome to Columbia) from the former Poetry MFA Ambassador.

There’s invariably one thing that happens when writers get together: they talk shop. Whether it’s the politics of their genre/department, publications, what they just read or wrote, or just gossip, the conversation will turn toward that thing we all do. “Where do you write?” might seem like a straightforward question with a variable answer of “the coffee shop” or “the library” or “at home,” but if I clarify that to mean “where do you put your words?”—we have an interesting question. Most writers type at a laptop or desktop computer when it’s time to produce finished products, but what do you do before then?One night, I was about half an hour into editing a poem—it was a pretty significant reworking and featured a new 12-line stanza I was mostly happy with—when my computer froze. After the reboot, my word processor was unable to recover the document, and I lost not just a half hour’s work but also the bulk of a stanza (I remembered the first line or two, I think). From then on, I did all of my writing and editing in Google Docs, which is great for finished things or things that are in progress, but it’s generally awful for jotting an idea down quickly. Of course, Google has a solution for that. 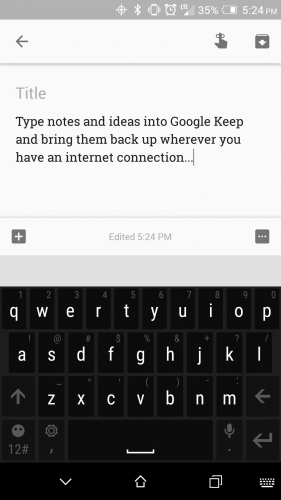 This is a screenshot of Google Keep from my phone.

Google Keep is one of dozens (probably hundreds, to be fair) of note taking apps that sync with a cloud server and give you access to your notes wherever you are. It has a nice Google Docs integration and generally gets along with all Android things as well as anything that’s running Google Chrome. Google Keep isn’t a bad app and is definitely something to try out if you want to have easy access to your notes and jottings wherever you go.

The only reason I even knew about Google Keep, however, is because I was getting frustrated with the Evernote web interface after switching to a chromebook for much of my writing. If you want a versatile note taking app that does more than the basics, Evernote is it, and aside from its hiccups when I tried to use it with a Chromebook, it seems to be one of the best cross-platform options, getting along with your Android phone, Macbook, and Windows PC nicely.

There are also plenty of other note-taking apps you could try and experiment with to always have access to ideas and phrases you didn’t want to forget, but I’ve found myself using Google Keep less and less and sticking with the classic pen and paper. Nobody gives you looks when you scribble down a note in a journal like they would if you were tapping on a smartphone screen, and after a few weeks of taking it with you everywhere, it becomes second nature. Now if only I could easily turn all these notes and ideas into poems…