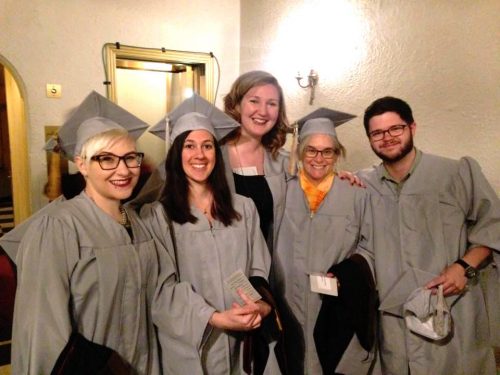 When I first opened my email three years ago to see that I had been admitted to Columbia College Chicago, it was hard to imagine being here right now, standing on the other side—program completed, hooded, graduated.

When I left Florida, I had no idea what lay ahead, even though I’d driven that route up I-75 before, seen the mountains of the South and the cornfields of the Midwest. What I found at Columbia, however, was unlike anything I could have imagined.

I found a real community of writers who were just as passionate, inspired, dedicated, and completely human, in all of the best (and messy and vulnerable) ways, as myself. I can’t count the number of times I’ve had a major breakthrough or moment where my mind has been blown in the classroom, whether it was some tidbit of obscure knowledge from one of Aviya’s meandering talks or David MacLean’s insanely detailed diagrams that describe how an individual essay works (to give you an idea, he once drew one of my essays out as a comet in orbit). In the thoughtful words of my classmates discussing the week’s reading or when offering feedback on our work, I feel I’ve absorbed and taken away a part of all of you.

Grad school is important to perfect and hone your craft and make professional connections, but what I think has been the most important human element of graduate school is friendship. One of my favorite courses from my time at Columbia was a reading course taught by Aviya Kushner on prose by poets, with a specific emphasis on what it means to have a writerly friendship. In the texts we read, these poet-essayists wrote about each other’s work in such deeply intimate ways, ways that revealed true understanding, respect, and camaraderie. Without such connections, being a writer would be an even more lonely, isolated endeavor. People often think of writers as solitary creatures a la Emily Dickinson, locked away in their high towers of books and papers, forgoing social contact in allegiance to the word. There is plenty of silence and solitude, to be certain, but even more than pens and paper (or computers or typewriters) writers’ friendships are among the most invaluable tools a writer can have.

As much as non-writers want to sympathize and be understanding to our work, without going through the process of creation, drafting, editing, writing, rewriting, frustration, and joy, it is hard to truly comprehend all that goes in as well as the myriad ways to solve the issues plaguing us or our work. There is nothing that can replace a good writer friend who understands you, your work, and your style; a friend that doesn’t try to change who you or our work are, but merely tries to help you discover the best versions of both.

When I left undergrad, I had a couple friends from my writing program that I still stay in touch with and share pieces with, but it often seemed like an impossible miracle to forge a solid friendship with other writers, given our innate competitiveness and sensitivities and the wide array of styles each of us employ in our work.

As I leave Columbia and my post as Graduate Ambassador for the Nonfiction program, I move on as the Senior Editor of OneGlobe Citizen and the Communications Assistant at 826CHI, but I’m proud, grateful, and yes, even, #blessed to have come to work with and know so many amazing writers. I am joyful to call them my friends and colleagues and to know that even if we aren’t sharing a classroom anymore, we can still pop around the corner for a beer or email each other our latest essays, looking for that discerning outside eye that can tell us what it’s REALLY about. Thank you all for joining me on this wild adventure. It’s been a blast. 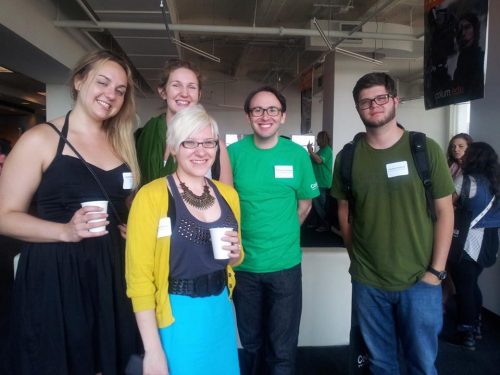 Where it all began!: Orientation Fall 2013