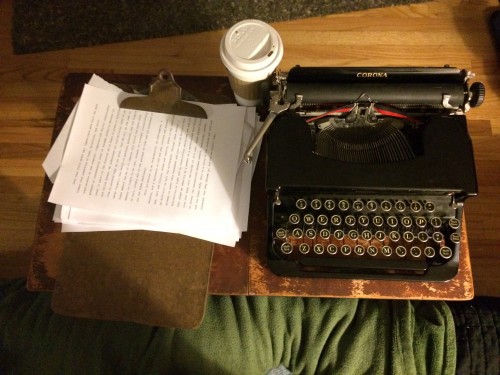 I finally did it!

Thursday night I submitted my complete thesis manuscript to my advisor(!), so I finally have a little bit of time to breathe—until I do my final revisions based on her commentary. The real deal is due in April, so I have a little more than a month to get it finalized, printed, and delivered in the most official of fancy-paper-hard-copy-in-a-box ways.

I remember back at the beginning of the program where thesis sounded terrifying. A 120-page minimum PLUS a 20-page critical introduction! Advice swirled from students who were ahead of me: Don’t think about your thesis in your first year! You should already know what you’re going to write about. It’s going to change, so don’t get started so soon.

And the second year where it sounded terrifying, creeping ever closer like an execution date of sorts. Who was I going to work with? What would it REALLY be about? Was that idea right or good enough? How do I even begin?

You can read any of my posts from this past school year to understand the scope and the enormity of the thesis and how much of my mind and life it occupied. It was hard getting started, facing old pieces I had set aside for a while or writing completely new ones to fit into my manuscript’s overall theme. 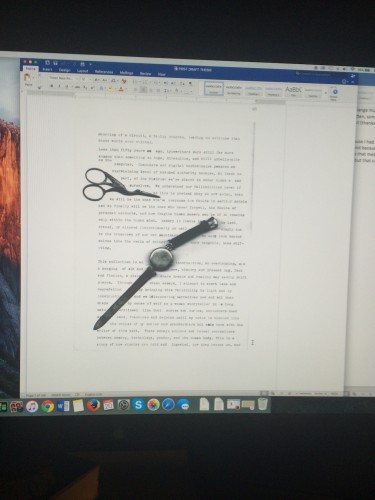 Word and image: an excerpt

And finally my third year where I faced it head on and triumphed! That’s not to say it didn’t have its scary moments: times I wanted to throw the whole thing away; times I thought a piece was ready only to read it the next day I realize it’s no where near where it needed to be; wracking my brain for new pieces; false starts, stops, and pauses of avoidance. Luckily, one of my favorite procrastination methods is simply switching gears and working on a different piece.  My manuscript tops out at 150 pages, which isn’t too bad in my book (pun totally and painfully intended).

I’m sure a lot of writers share this sentiment, but sometimes I really hate revision. It’s painful, exhausting, and demanding. Personally, I revise best after taking some time off from a piece (maybe a month or more), so I can forget the language that I’ve memorized by the point the first draft is complete. I’ve found it’s easier for me to look at it fresh, almost as if it was written by someone else before I dive in and give myself notes for the next draft. Sometimes this involves laying out the design of an essay in an outline-like form, sometimes it takes the form of going through printed pages with pen in hand or using the track comments feature in Word.

I’ve written a ridiculous amount of drafts for each piece I’ve included in my essay. If I had to guess, I’d say I’ve easily written/re-written around 100 pages that didn’t even make it into the manuscript.

Have I mentioned revision is painful?

Though it started that way, what I noticed after a while, however, was that I was so deeply invested in these pieces (or the IDEAS of these pieces) that it got easier and easier to jump in, make changes, “kill darlings,” or even scrap entire drafts. Some pieces didn’t change much from the last time I worked on them pre-thesis. Other pieces were completely rewritten, sometimes even breaking one essay into two after figuring out what it was REALLY all about (thanks to Aviya Kushner for helping me struggle through so many drafts!).

The past few months I joked that I was pregnant with a manuscript, partly because I had gained some thesis weight (I haven’t hit the gym as much as I used to due to writing…) and because of the way I watched it change and grow and the hours I labored over it, so I guess that means I’ve given birth to a beautiful 150-page manuscript. I’m still uncertain of the name, but that can change (without a legal process and court proceedings). 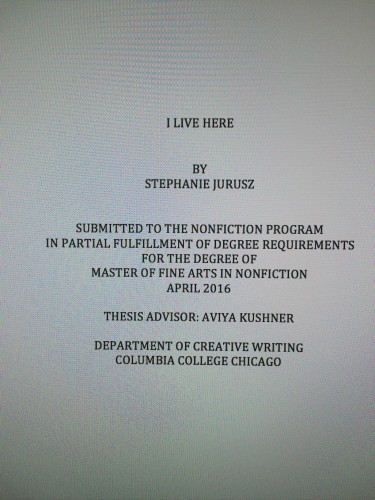