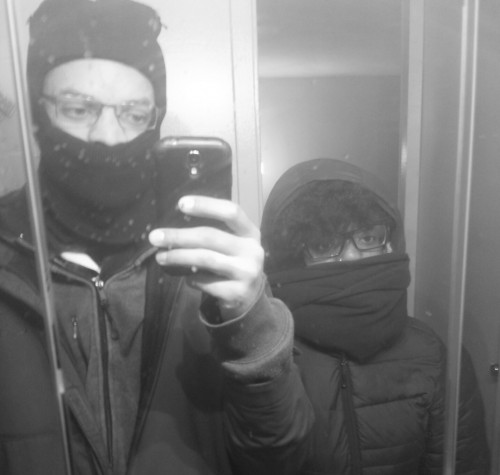 Rahsaan and I on our way to work during last year’s blizzard—we’re bundled up similarly this winter too. But do you see my face? I was so over Chicago’s weather.

In middle school, my mother let me read one of her books on spiritual/faith-based growth entitled Don’t Die in the Winter:Your Season is Coming. I can’t remember everything about it, but have since resonated with the basic gist—keep persevering, pressing through the hardships because better days are ahead.

Now that I live in Chicago, the title has shifted from being a personal aphorism to a literal maxim for survival. Don’t Die in the Super Cold, Below Zero Winter with Wind Chills Making It Even Colder: Spring is Coming.

Don’t get me wrong—I’ve experienced cold weather before.  But cold weather coupled with heavy winds paired with polar vertexes? A very new thing indeed for me in Chicago. This winter season may seem milder/warmer than last year’s—but it’s still cold!

Weather like this makes me want to do nothing but stay curled up on the couch and be antisocial. I don’t want to bundle up, I don’t want to go out, I don’t want to see people. I once would curl up and read, peaceful in my solitude. Now, Netflix has taken over my life! And I’ve also accepted I’m not great at productively writing from home—so in order for me to really get stuff done, I need to get up, get out, and go somewhere.

What’s great about Chicago is that, unlike my own personal nature, the city is undeterred by the cold. No matter how cold it is, life in Chicago goes on. Buses and trains still run (although possibly delayed), businesses are still open, there are still things to do. During my five years in DC, I grew accustomed to the city shutting down at the most insignificant of snow dustings.

Anyway, I’m trying to learn to embrace the cold—primarily for sanity’s sake. (It has gotten to the point where I know and am actively thinking of all the things I need to be doing while still refusing to turn off/look away from Sons of Anarchy).

I’ve never received the above message on my personal Netflix account before. I randomly found it in a general Netflix GIF search. But is it a Sign from the Powers That Be? I mean, don’t want to sound like a conspiracy theorist but… how did Google know to show me THIS image about THAT SHOW?? #JustSaying

But what I’ve noticed is that once I change my attitude about the winter, it’s easy to put the remote down and do almost anything else. With the winter comes the added perk of fewer tourists in the city, allowing me to have a more intimate/less rushed experience when doing activities like:

The more active (and out of the house) am I, the more productive I am.

Yes, it’s cold. But that doesn’t mean that art, both on the page and in the life around me, has to stop. I just have to keep reminding myself of that and keep pressing myself to take opportunities to remain engaged. I can’t give this Chicago winter my life.