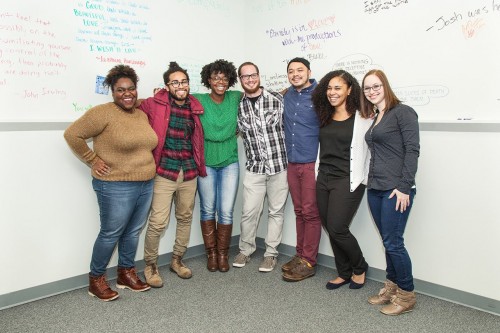 At a house party on Halloween, a fellow MFA-er turned to me and said, “Courtney, you’re everywhere.”  A classmate a week before said something similar when she bumped into me working the front desk of the Department of Creative Writing.  Two weeks after Halloween, a professor remarked how impressed she was at my managing to consistently get writing done despite the amount of time I spent on campus.

This semester, I practically live here at Columbia College Chicago.  As Ambassador, as a Graduate Event Coordinator, as a Computer Lab assistant, as the Vice President of the Department of Creative Writing’s Graduate Student Organization, and as a Teacher’s Assistant for one of CCC’s new Big Chicago course offerings for first-semester freshmen — I really am everywhere and it really has felt great.  (Don’t tell anyone I told you this but I secretly reside in a hidden panel behind a 12th Floor bookshelf in the 624 S. Michigan Avenue building.) 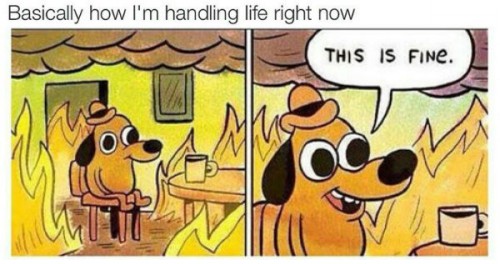 This is one of my favorite memes; texted it recently to a friend and cohort member when I felt overwhelmed.

Seriously though, time management and knowing how and when to say no has been crucial.

But a few weeks ago, I took an unannounced, unplanned break.  I spent a Friday through Tuesday doing absolutely nothing but sitting on my couch.  First, I binge-watched Matt Damon on Netflix.  Then came across a Game Changers feature on J.K. Rowling before getting lost in Youtube magic clips that ultimately ended with me hyper-Googling David Blaine.  (The journey was great.)  When my fiance begged me to be productive, I just scoffed and asserted I was compiling research on a non-existent work-in-progress.

I decided to resurface from the depths of my Google finds after watching Blaine’s TEDtalk on how he managed to hold his breath for 17 minutes (**spoiler alert** he almost drowned in his first public attempt).  Near the end of his speech, Blaine says:

“As a magician I try to show things to people that seem impossible. And I think magic, whether I’m holding my breath or shuffling a deck of cards, is pretty simple. It’s practice, it’s training, and experimenting while pushing through the pain to be the best that I can be. That’s what magic is to me.”

I thought immediately, “Art is magic.”

Truthfully, though, I sometimes wonder if MFA institutions hinder the spells cast through that magic.  There’s plenty of articles, blogs, and essays on some of the issues of the MFA program, stifling creativity being one of them.  A few instances this very semester, where students in one program felt they couldn’t adequately write something studied in another (i.e., Fictioners balking at writing a nonfiction essay, Nonfictioners unable to write poetry, or Poets uncomfortable writing fiction) have also made me consider how the declarative program labels hinder us too.

Some of the most mesmerizing art I’ve read were by authors who refused to be labelled as any one thing.  Look at Edgar Allen Poe (I didn’t study him in my Modernist course but he’s a great example).  He wrote it all: love stories, love poems, craft essays, mysteries, horror, creepy poems, adventure…. You name, Poe most likely did it.  But then, Poe was a Writer before anything else.

Okay, a weird writer, but a writer nonetheless. / Photo Courtesy of stuffpoint.com

I will say, though, that something I like about the Creative Writing Department here at Columbia College Chicago is that the professors here listen: to students and to the conversations within the industry.

Professors here are constantly looking for new ways to keep the writing experience magical.  They may not always get it right, as the Columbia Chronicle recently reported in it’s article on the Department letting Story Week go so easily without a fight.  But I believe they are trying.  If anything, the recent merger, recently reported in the Tribune is proof.  Our program is exploring ways to reducing labels to keep the doors of creativity open in the classroom.  One way that’s been particularly successful (although I’ll admit, I’m biased) has been the new Reading Series.  The authors who have read for us seem to understand and support the desire to reduce the label.  Bonnie Jo Campbell, for example, chose to read fiction, poetic prose, and a non-fiction investigative article of hers.

Coming back up to reality from the depths of addictingly engaging cyberspace, I initially felt guilty.  I had nothing to show in class for my hiatus.  That time could have been better spent writing or reading or working on the essays and presentations piling up on my to-do list.  But the more I consider Blaine’s TEDtalk, the more I believe I needed that.

Because truthfully, when it gets down to it, professors and programs can only do so much.  It is ultimately up to us — the student, the writer, the artist.  We have to find our own ways to tap into magic.  And we have keep in mind most magical educational experiences have little to do with the classroom.