Production crew hard at work on a graduate thesis film.

A recent article posted by The Hollywood Reporter listed the top ranked 25 film schools in America. Columbia College Chicago made the list at #16, announcing it as the largest film school in the country and quoting both department chair, Bruce Sheridan and BFA alumnus, HBO Films president, Len Amato.  The list is an interesting read and provides insight into what seem to be some of the important factors in effective film and media education.

There is definitely something exciting about seeing the name of your school listed among the top 25 in the country. A handful of my colleagues shared this article through social media although a lot of these postings were accompanied by a consensus of wanting to see that rank move higher on the list.  Ranking #16 is already pretty cool but it’s of no surprise that you want to see a higher ranking—really—to know that the place you are investing yourself in, is a place known for its solid education of filmmakers.

In all honesty, I have no doubt that Columbia has huge potential to climb that ladder pretty quickly. We are the largest body of film students in the country and there is something important to be said about that. The network that I have built as a result of attending Columbia is pretty large now and the variety of colorful stories that you can tell, at times seems endless. However, one part of this article bothered me.

“The idea, according to department chair Bruce Sheridan, is to produce undergrads who don’t need a higher degree to find a job. ‘”We know that 25 is old in Hollywood,”‘ he says.”

The notion that I am saddened by and fundamentally disagree with, is the notion that “25 is old in Hollywood.” This statement not only downplays the effectiveness of older students, it also is a misrepresentation of what our graduate programs are attempting to do.

Having completed the Creative Producing program at Columbia, I can say that it is structured in a way that teaches the Hollywood system and most practice within the program imitates that system. Our classes are designed to lead us toward the creation of a long-form narrative project that by our final semesters, we work to package, and the most exciting part is actually pitching to Hollywood studio executives.

In fact, the entire last semester is structured to place us fully within the L.A. industry the moments leading up to and immediately following our graduation. It’s what our cohort has talked about since the first day of class and with completion of the program within two years time, it is a huge selling point. 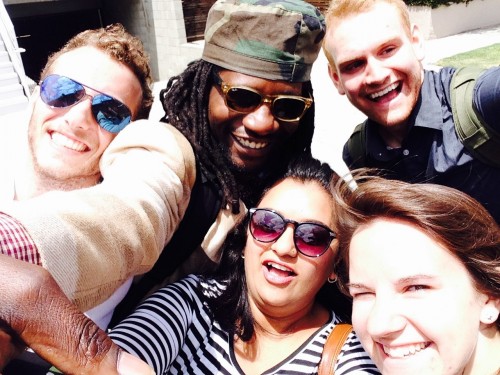 Group of 2015 Creative Producers after classes in LA

Although we each had varying motives for choosing Columbia, two things are for certain – this was the structure we were looking for in a program and we all entered as 20-somethings or above. If the attitude or the “idea” of our programs as THR reported, is that “25 is old in Hollywood,” then it really seems to negate why we’re even here.

There are many wonderful things that I enjoy about our program. As mentioned before, we have the largest film school in the country. The number of possible stories within that is huge and the collective body of talented artists to work with has been an asset to me during my time at Columbia. It’s made building my network easy.

However, the attitude is not something that will help resolve challenges that we face in our program—the same challenges that keep us from being greater than #16. That attitude can only cost us further in the long run. It dictates what kind of hurdles we face as graduate students and if we want to strive to be greater, then we have to abolish that as a philosophy and develop every student that wants to be a filmmaker as much as possible at every degree level.

If there is one thing to know about filmmaking, it is that everyone has a story to tell and everyone is capable of telling those stories. Anyone can be a filmmaker—and they are completely capable of being effective filmmakers at that. In fact, this is part of Columbia’s mission as an institution for higher education in the arts.

If this one notion is negated, then there is failure to have proper insight into what this field is. 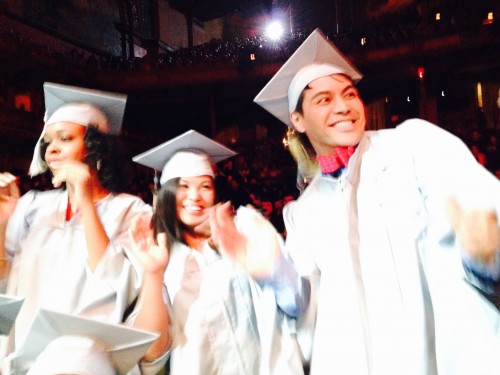 Graduate students at the 2015 graduation ceremony.

For the full article, visit: http://www.hollywoodreporter.com/features/top-25-american-film-schools-811367