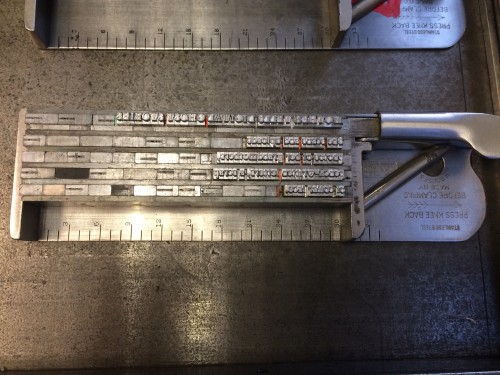 Setting Type in the Book and Paper Studios

As writers, we all have our set methods, preferred places and times to write, our tried and true practices that guarantee success…or do we?

With the change in season and shift in semesters, some of the time-crunch, time-pressure, and instability that I had come to rely upon as part of my writing life has dissipated. What does this have to do with my process? Everything!

This summer I’m taking my LAST class of my MFA program at Columbia (fall and spring will be solely devoted to thesis hours) with Josh Young: cross genre and the ephemeral. Unlike any other class I’ve taken, this one has really served to remind me that any and all writing is really just an experiment. You might have a better idea what the outcome will be some times than others, but in the end, writing can feel different each time you approach the page and not only that, it probably should.
Confession: when I was younger and I thought I wrote something “really good,” I’d try to meticulously recreate the external conditions to conjure that magic up again. I’d write at the same time in the same place while listening to the same music…you get the point. While this consistency undoubtedly works for some people, guess what? It doesn’t for everyone and it doesn’t have to. Cross genre is simply anything that defies standard generic conventions. It may look like a play but act like an essay or look like an essay and act like a poem. It can blend conventions of form and shift shape, and there’s a good chance readers might try to debate what the heck it actually is. A prime example? Theresa Hak Kyung Cha’s Dictee.

As for the ephemeral, a standard dictionary definition suggests a kind of magic belonging to things that are brief and short-lived. In our case ephemeral is the lost and collected, the writing that happens beyond just words on a page, something that invites a reader to further interact with a text beyond the words on the page. Ephemera can take the form of photos or found objects, things that don’t necessarily illustrate what is written in the traditional sense but provide additional flavor, texture, or implications to a written work.

How does this change my writing process? Drastically! I think many writers become stubborn (sometimes read: lazy) and fall too deeply into habit or routine. The work I’m doing for this last class is forcing me to really mix things up and take risks, try things that are unproven in my own writing and bring them to class anyways. I’m cutting up pictures and forcing myself to write around them, using my typewriter as the final medium (instead of printing it from the computer), and writing poetry instead of my standard prose. I’m embracing the idea of being more loose, going with impulse and ideas instead of sticking to what I “know” works already for me. 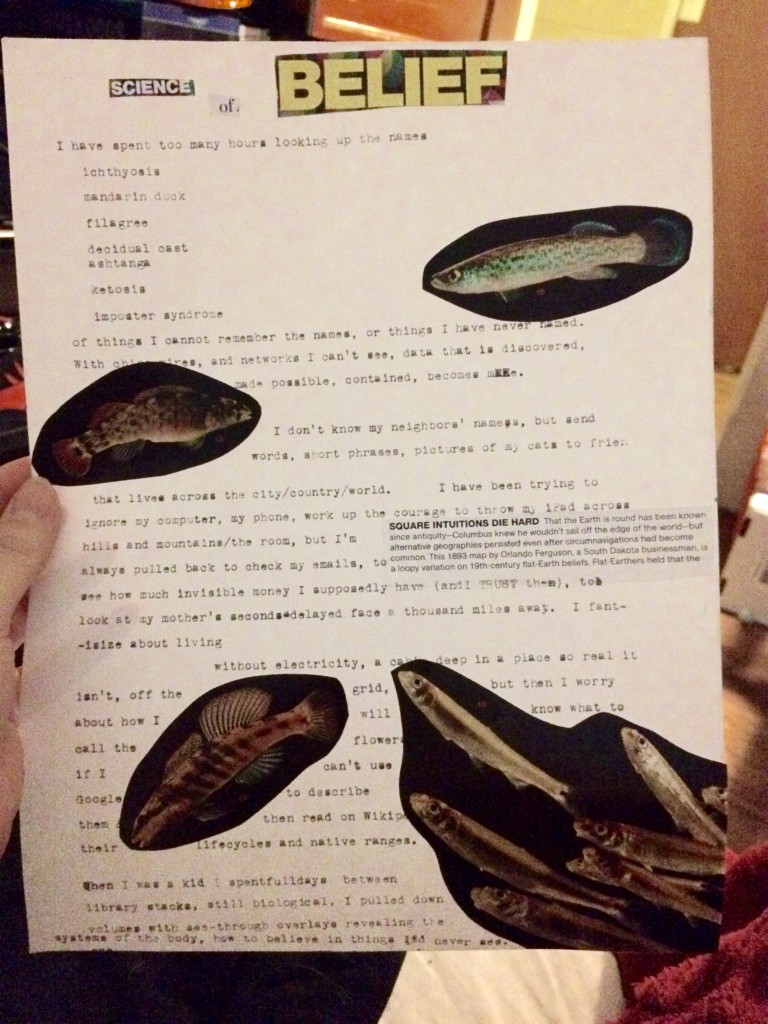 An Experiment with Images and Typewriting

One of the greatest lessons I think you can learn as a writer (and probably applies to a lot of other stuff) is that it’s okay to fail. Sometimes you have to get messy and risk screwing a piece up completely to better understand how far it could possibly go and what you have the skills to do as a writer, even (especially) if you didn’t think you had it in you.

My challenge to you: do something that you think you will probably fail at, be willing to get messy and go along for the ride. Who knows what you’ll end up with?