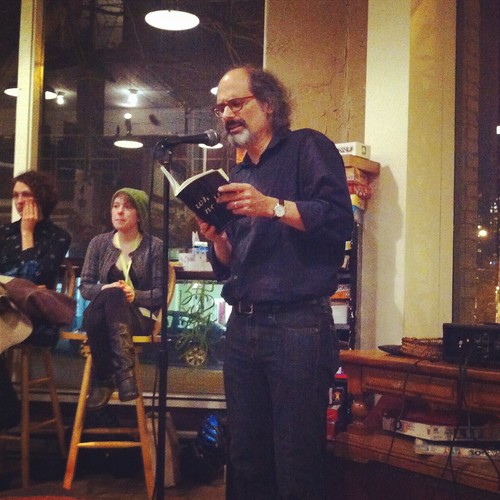 My thesis, on the surface level, concerns a double murder that happened outside of my hometown in Georgia in 1930, and the bodies were found buried under a pea patch. The gravitation toward this particular project was indelibly influenced by a craft seminar I had last year with Tony Trigilio called The Historical Poem. And Tony, Director of the MFA Poetry program at Columbia, directed my thesis.

At AWP in Seattle, I had the remarkable opportunity to read alongside Tony at a reading put on by The Lettered Streets Press, Ghost Proposal, and Apostrophe Books. I’ve asked Tony to say a word or two about his experience at the reading as well as some of his current projects.

It was a joy to take part in the Apostrophe Books/Lettered Streets Press/Ghost Proposal off-site reading at the AWP Conference in Seattle. I read from my book, White Noise, which Apostrophe published in 2013. Lettered Streets Press and Ghost Proposal are products of Columbia College students and alums. I’m thrilled by the amazing work they do as writers and editors—our students and alums are deeply invested in their own writing, and they share an ethos of community-building. They work hard to bring exciting, innovative writing into the world and to create audiences for this writing.

Like all faculty in the Poetry Program, I’m involved in a number of projects at once. I’m happy to be in the middle of a lot of new work right now. I’m teaching a new craft seminar, “The Persona Poem,” and I’m having a blast exploring new ways of thinking about mask, persona, and language with my students. This semester, I’m also working on Book 2 of my gigantic experiment with the autobiographical poem, The Complete Dark Shadows (of My Childhood). Book 1 was released by BlazeVOX Books about a month ago. I’m a huge fan of the documentary/historical poem, and I’m working on a manuscript of poems on the alleged UFO abduction in 1961 of Betty and Barney Hill in New Hampshire’s White Mountains. I’m also writing individual poems unconnected to theDark Shadows project or the Betty and Barney Hill manuscript. Just this past week, I uploaded the most recent episode in my poetry podcast, Radio Free Albion, a monthly show in which I interview poets about their most recent books. This month, I interviewed Nick Twemlow about his book Palm Trees. Music is also vital to me—fills gaps for me that language and text can’t cover—and I can’t wait to rehearse with my band, Pet Theories (think, Velvet Underground meets Can meets the Police), when I get back to Chicago this coming week.

Tony Trigilio is the editor of Elise Cowen: Poems and Fragments(forthcoming from Ahsahta Press in Spring 2014). He directs the program in Creative Writing/Poetry at Columbia College Chicago and co-edits Court Green.