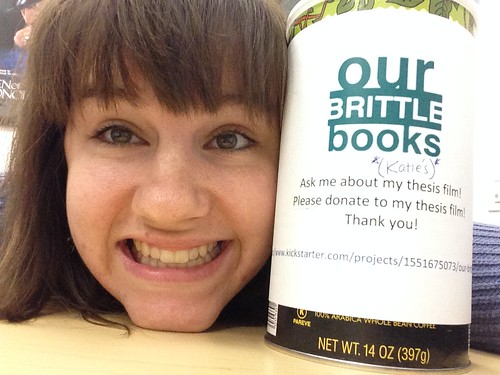 Desperate times call for desperate measures – I placed a donation bin on my desk at work!

Since arriving at Columbia, one of the most difficult and most frequently discussed topics from my cohort has been around the question of “So who pays for this film anyway?” And the immediate topic to follow is usually “So who owns this film anyway?” Both answers to those questions are lengthy and complicated.  I’m not going to, nor could I answer both of them in just one blog post. Nonetheless, the topic is hugely important so I want to share an aspect of the greater subject here.

A producer has about a billion responsibilities to take care of before his or her job on a film can be considered complete and even then, there still may be further responsibilities in the future years that follow.  Filmmaking is a living and breathing thing and the life of a project can last for a long time.  If you’re lucky, it outlives you.  But it all has to start somewhere, right?  The beginning is usually with the concept but we can fast-forward to the part where someone says, “Let’s make this happen!”

This is the part of the process where the “how” questions are asked and of course the “how” questions usually—nope! I won’t even say usually—pretty much ALWAYS require money.  So where does this money come from? Who says, “Yep, this is worth dropping five mil on!”  That person is the producer.  The producer, however, is not necessarily the person with the five million to drop but it is the producer’s job to get that money to make the film happen.

Now, different situations will allow for different resources.  If you work for Disney, Sony or another major production studio, that money is probably already there or won’t take much effort to arrange.  If you work as an independent producer, that most likely means talking to investors, getting grants, or sometimes crowd funding.  Then… if you’re a student or a beginning filmmaker, this means trying to model those systems.  Perhaps you as an individual already have the funds but if you’re like most students I know, you don’t.  Usually the next decision is to turn to parents or crowd funding.  For my particular situation, I have turned to crowd funding in order to raise money for my current project—my thesis film, Our Brittle Books.

I have been involved with crowd funding campaigns in a couple of varying degrees before but I have never organized and launched one for myself.  I did a ton of research about the process before making the decision and no amount of research could have properly prepared me for what the experience has been like.  Personally, I am not a big fan of asking for help.  I have always been a fairly independent person, supporting myself and working in the real world on my own for quite some time.  So when a person like me needs to ask for help, you can bet there are a lot of lessons to follow.  The first lesson was that producers thrive on asking for help.

This doesn’t just mean money and funding, producers need to ask for help and rely on people throughout the whole process.  Trusting people to get a job done can be difficult, especially at the student level when you sometimes can’t pay people. With that being said; if you want to move forward with a project and you’re going to ask for people’s support and for people’s money, you better believe in your project with every fiber of your being.  People can see right through you if not.

If crowd funding is your desired approach, there are a ton of websites that host fundraising campaigns.  The most popular sites include Kickstarter, IndieGoGo, and GoFundMe.  There are a number of advantages and disadvantages to each so you have to do your research and figure out which platform best supports your needs (again, another subject for another blog post).  For my project, I decided to launch on Kickstarter.  I chose this platform because Kickstarter in my opinion, hosts the largest audience with a strong sense of community, would appear the most professional to my donors, and because it is an all-or-nothing platform.

Wait, what? All-or-nothing? Yeah, it literally means that I have to raise all the funds for my goal, or I get absolutely none of the funds pledged.  It is a pretty big risk to ask people for money and then know that if it doesn’t go well, all the efforts went to waste.  This was not an easy decision but I felt that if people knew I wouldn’t get any of the funds without hitting our entire goal then they would hopefully feel more connected to whether or not the campaign is successful.  If they were willing to donate, then hopefully they were willing to be an advocate for the project by sharing it with others.  It is still a risk though.

What I can tell you about the experience thus far is that crowd funding is stressful and hard.  It could be someone’s full-time job.  My most frequented website is currently Kickstarter and they even have an app for your phone that tells you when someone has donated.  I feel like I must look like a money-crazed lunatic to my friends and family right now.  The other night my classmate and friend, Omar, said to me “I hate watching you look at all those graphs.”  I got worried that I must look as though I’ve become obsessed and now he thinks I’m losing it.  When I asked why, he said it was because he knows he has to go down that path soon and he’s not sure he’s ready. 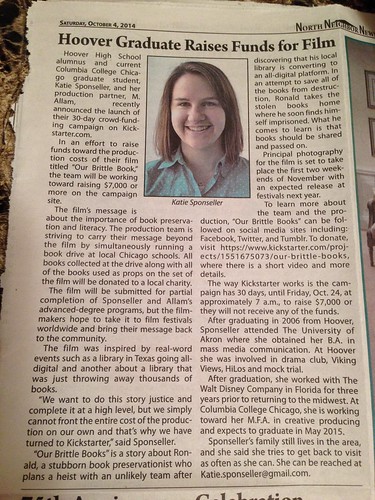 Spreading the word back home – we were covered in the North Neighbor News!

I wrote press releases, donation letters, made phone calls, talked to people in person and I currently have three social media pages that I’m managing with one other person just to keep it a topic of discussion every day.  If this was the only thing on my plate right now, I feel like I could reach for the sky and we could have funded this film weeks ago, but when you’re a student with classes, a job, a thesis film, and life happening around you, there is only so much that can be done.  Maybe there was a smarter, easier way to do this.  If you know of one, let me know!

We have had three major developments during the campaign that really helped push us.  The first was being covered in a local newspaper in my hometown, the next was a donor that pushed us over our halfway hurdle, and the latest was making a connection with an interested blogger who not only donated but interviewed us for his blog.  Each of those moments gave us momentum and it was amazingly fun, but we still had to keep working.

I am almost on the other side now and I can say that I have honestly learned so much.  The biggest lesson is that you have to believe in what you are doing and you cannot be afraid to ask for help.  The second lesson is that you have to talk about your film every single day, at every avenue, and you cannot stop promoting what you are doing—this is true of filmmaking in general, not just of crowd-funding.

My campaign has been up for three weeks now.  It was launched with a thirty-day timeline.  At the time of writing this post, we have one week left and we still need about $1,500 to be successful.  By the time this post is up on the blog, that may have changed and hopefully for the better! 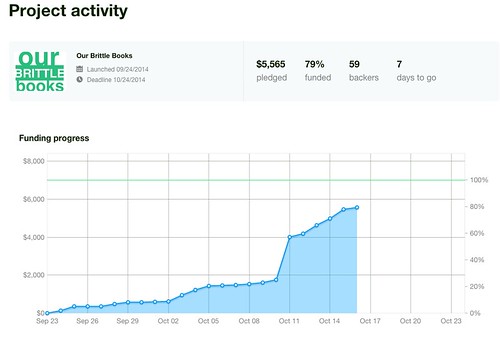 Crowd Funding Progress with a week left to go! I hope we make it!

Above everything else, the gratitude that I feel after this is immense.  Friends and family may not like or even care what the film is about but they will always support you.  Others don’t even know you but they can dig what you’re doing and they decide to donate funds to you in hopes that you can make it happen.  It is completely humbling to be supported in either of these situations.

To check out my own campaign, click here! To see some really interesting data on my campaign’s progress and to look at some pretty charts, click here!