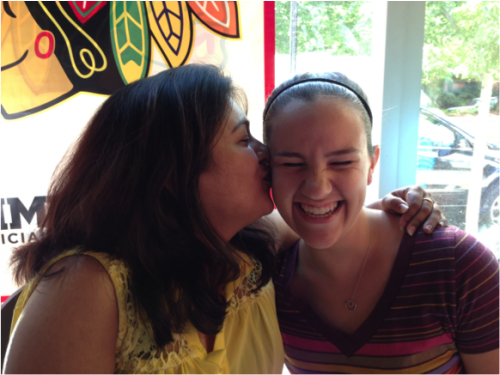 Almost a year to the day – Fellow Producer, Prajakta, and me at the New Student Social

It was all laughs and hugs the first time I saw my good friend and fellow creative producer, Prajakta, at the train station. It had been over two months since I had seen her.  Some of my classmates, it has been almost three. Prajakta is from Mumbai, India and thus spent a good portion of her summer there to visit family and work on her thesis film.  I had just returned from Florence, Italy, where I had been studying Italian neorealism and making two short films.

As I hugged Prajakta tightly, I realized how very much I had missed her and my other classmates. It was just a year ago that Prajakta and I were assigned as partners on our very first day in bootcamp. We had to create a character out of random craft supplies and give it an identity and back story. After the crude construction of play dough, pipe cleaners, and a bottle cap, we somehow managed to make a woman that we called a witch doctor, who had the power to cleanse souls. 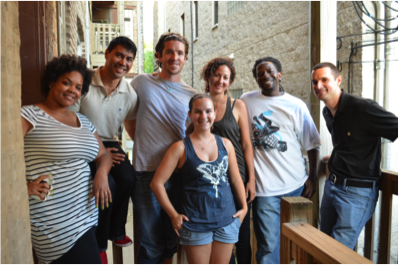 My team after we filmed our final short for bootcamp!

Since that time, Prajakta and I have become incredibly close friends and we have worked on several films together. This has actually been the story with most of my classmates both from the Creative Producing program and the Cinema Directing program. In fact, when Prajakta and I had met at the train station that day, we were heading back to the apartment of our friend and directing classmate, Omar.

We sat in the living room, a place where we shot scenes from two different films over the last year. We discussed our summers and what we had been up to. We talked about where our other classmates were and what they were doing. It was then that she made the statement “You know, everyone in our class is doing something big this summer.” And she was right, from what I could tell, no one had been idle. Some were traveling in other countries, some people were teaching at schools or film camps, some had internships, and a few people were making films. Many of us also spent time prepping for our thesis films and by the time we start class this semester, one team will have already completed principal photography.

As if this conversation wasn’t a whirlwind of emotion and nostalgia already, I recently had a moment that locked everything into perspective. While working at Columbia’s Media Production Center, I saw some of our professors filing in a class of new students. It took a second but I realized that they were the incoming graduate bootcamp class of producers and directors. I don’t want to sit here and tell you that they looked young or scared or anything really. None of that struck me to be completely honest. They just looked like us. They looked like my classmates and me. It really was not that long ago that we were being filed into the MPC during our first few weeks at Columbia.

It was crazy to me because I don’t think I look all that different from a year ago. I look just like those students coming in, but I am not the same as them any more. The last year changed me so much. The things I know and the experiences I have had, have transformed me. I think my classmates have changed too. The Prajakta that made a witch doctor with me is not the same Prajakta that I hugged at the train station. So why am I saying this? Because so much of this program is reading articles, writing papers, expressing yourself, and getting on set. All of which are important, but there is another side of this program that is just as important and that is the network you build and the friends you make.

My network of classmates and friends are part of the reason why I have changed. When my parents asked me how my first few days in class were last year, one of things that I couldn’t stop talking about was how diverse my class is. We all came from different places, different backgrounds and experiences. Spending the last year with them has helped shape how I collaborate with people and it has shown that we can learn just as much from our peers as we do in our classes. 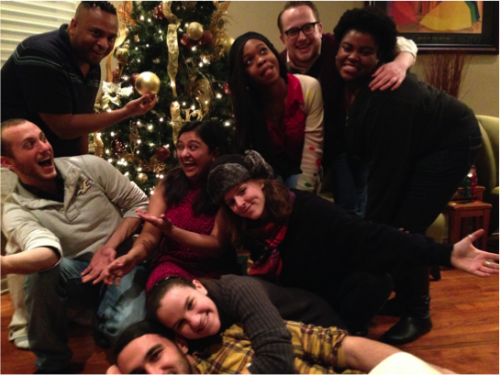 The 2015 Class of Directors and Producers celebrating the holidays last year. 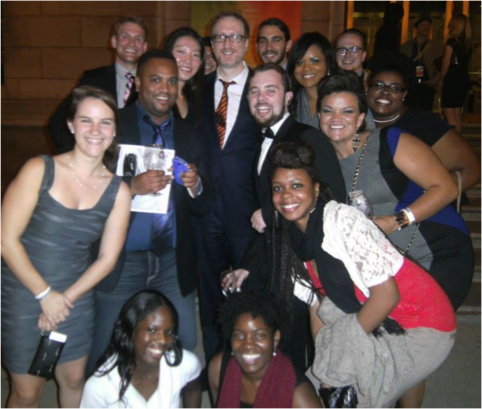 The 2015 Class of Directors and Producers at the 2013 Chicago International Film Festival with Director, James Gray.