What a year 2012 has been! I am not sure I have ever experienced a year that has gone quite as quickly as this one. In honor of the passage of time and the fact that it is the holidays, I wanted to try and sum up 2012 by writing about some of my highlights and compiling those of my fellow graduate ambassadors. The format is a one sentence summary of each month followed by a link to a great blog post from that month. So here it is: Ali’s 2012 Holiday Wrap (sorry for that terrible, terrible pun).

January was cold and snowy, and due to the Nato/G8 summit, the semester started two weeks earlier than planned—everyone had to recharge their batteries in double quick time before the new semester kicked in. Chris Terry wrote a great blog post about where to live in Chicago.

February was all about new classes, including getting to grips with advanced accounting/finance…yikes! Mason Kaye (Music Composition for the Screen MFA) explained why Chicago is awesome.

March was a blur of mid-term papers and an AEMM field trip to The Second City to see Rhys Darby. Dan Mollison (Film & Video – Creative Producing MFA) filled us in on the weather around these parts.

In April, I went to Texas for a friend’s bachelor party, and although it was not strictly educational, I definitely received some sort of schooling. Evan Baden (Photography MFA) blogged about blogging.

May was the end of the semester…enough said, methinks. Nikki Hartel (AEMM MAM) wrote about PGA: Please Generate Art, the graduate student exhibition for Manifest.

June was summer time in Chicago, which pretty much involved biking, beaching, and smiling. Nikki Hartel gets another look-in with her summary of a Chicago summer. (Pardon the pun, yet again.)

July was all about independence…well, a little bit of it was, and the rest was all summer summer summer! Mike St. John (Interdisciplinary Arts & Media MFA) checked out Navy Pier and the fireworks.

August was Lollapalooza and the start of the countdown to the new school year. Steven Spiel (Music Composition for the Screen MFA) was new to Chicago and wrote all about that.

September was the start of the new school year and everyone (first-years and second/third/fourth-years) had to remember how to do homework. I wrote about the new look of ShopColumbia (Columbia’s student-run art boutique).

October was all about our Entrepreneurship midterm paper…oh, and Halloween. Bubba Murray (Film & Video – Cinema Directing MFA) wrote about creativity and how to apply it.

November was when the Grad Ambassadors began to get bombarded with questions from potential applicants. Chelsie Batko (Dance/Movement Therapy & Counseling MA) blogged about her top 10 tips for applying to grad school.

December featured a few things, including stressful finals, no-finals-happy-time, and the Holiday Train. Oh, and this blog post. Happy Holidays everyone! For a bit of holiday cheer, check out the CTA Holiday Train video below…choo choo! 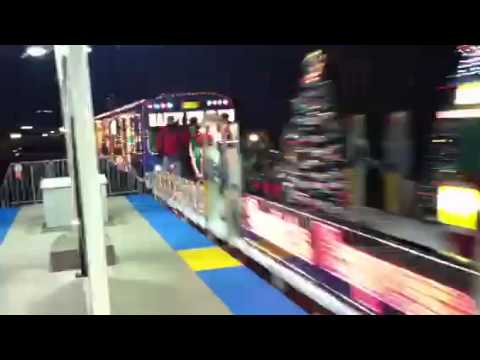