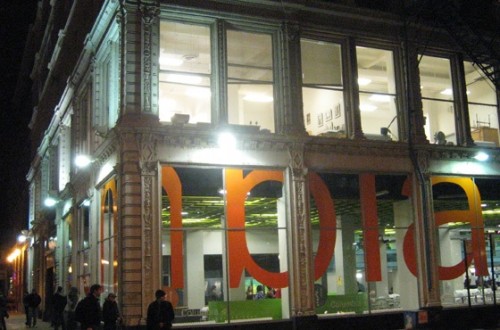 Hot off the heels of my last entry that talked about my experience with Graduate Preview Days, I thought that I would spend this post talking about why I chose to attend Columbia College Chicago.

I guess my choice to go to this school as a graduate student started back when I was starting to think about going to college in high school. Columbia was my top local school to go to then. It was hip. It was a school devoted to nothing but the arts. It was where I thought I wanted to be, but for various reasons, it did not work out for me being able to go for my undergraduate degree. Fast forward several years later. I was at NIU switching my original idea of pursuing a degree in Art Education to realizing that I wanted art practice to be a primary focus of my career but that I still wanted to teach in some capacity. K-12 seemed way too limiting. If I were to teach, I would want to teach at the college level. This meant graduate school. Now, I was already an older student, having taken off time between community college and finishing my BFA. I knew that I wanted to be able to go straight from undergraduate to graduate school. No break, no hesitation. Where would I go? Staying in state was a big priority for my family, so to me that meant Chicago. There was Columbia College Chicago returning to my thoughts.

I began researching to see what program to apply to along with researching other schools in the area. I had originally thought that I would go after a masters in Painting and Drawing, furthering along my study in my undergraduate degree, a BFA in Drawing. At Columbia, I didn’t find an option for that, I found something called Interdisciplinary Arts. More research. To me, interdisciplinary arts means that you make work that is about the work, not about the technique. I would be able to access whatever media I needed to make the work successful. I would not only be thinking outside the box, but out of many boxes. I was intrigued.

My wife and I attended the Graduate Open House. I was still mildly skeptical. The program sounded strange to me, even if appealing. I’ll admit I was very impressed with the welcome that we received right off the bat. It’s like the red carpet had been rolled out for us. A huge coffee and pastry spread was out, there were students there (Ambassadors!) answering questions, people experiencing a palpable excitement that was just waiting to explode. The informational sessions started winning me over, then we met with the faculty of the Interdisciplinary Arts Department. I felt extremely welcomed into the program. It meant a lot to me that the heads of the department were there encouraging us to apply to their school. That they really wanted us, me, there. Then we took a tour of the facilities.

I was done for.

Floor to ceiling windows letting in tons of natural light. The book bindery with all of its equipment that I was not yet familiar with but seemed like it would be amazing to use. My gods…floor drains in the paper studio! I’ll stop there, as there is no way that I can describe the utter gorgeousness of the Center for Book an Paper Arts. It is something that needs to be experienced.

I went home. I deleted my other applications, and I made the bold decision to apply to this one school. If I didn’t get in, there was not another school that I wanted to go to. I wasn’t going to spend my time and money on something I did not want this badly. It worked—I got in, and now I’m telling you. This is the best art school in Chicago. That’s why I’m here, and I could not be happier with my decision.