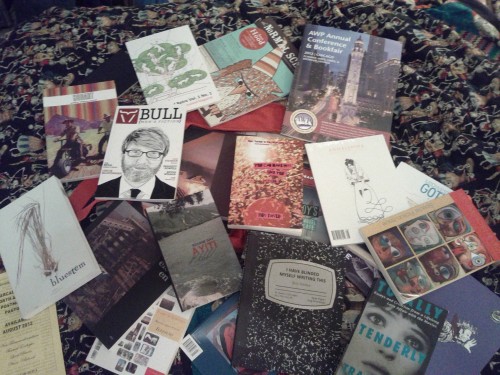 My haul from the AWP bookfair.

“Each year, AWP holds its Annual Conference & Bookfair in a different region of North America in order to celebrate the outstanding authors, teachers, writing programs, literary centers, and small press publishers of that region. The Annual Conference typically features 400 presentations: readings, lectures, panel discussions, and forums plus hundreds of book signings, receptions, dances, and informal gatherings. The conference attracts more than 9,000 attendees and more than 550 publishers. It’s one of the biggest and liveliest literary gatherings in North America.”

That’s from the site for AWP, the huge writing conference that was in Chicago this weekend. I’m now tired and broke and so darn happy and inspired to write.

Here are three reasons to go to AWP:

– It’s a chance to hear a few panel discussions that speak to your interests and aspirations as a writer. I’ve heard panels on everything from how location informs a writer, to how to get an agent, to queer writers in Appalachia.

– The gigantic bookfair takes hours to get through, but each table houses an interesting publication. I left with a totebag full of lit journals that I will read to learn about new writers and places to submit my work.

– This is your chance to have fun with your writing brethren. This could happen when you wind up talking to the person next to you at a panel, dancing at an afterparty, or meeting up with friends out of town. The social aspect is huge and leads to schmoozing, which leads to making connections, which leads to you doing more writing…once the hangover clears up. 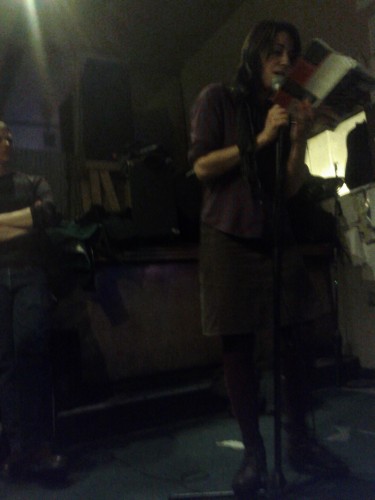 Sara Marcus reads from her book "Girls to the Front" at the AWP Neutron Bomb.

I wish I had an amazing story about getting a book contract from Charles Willeford‘s ghost, but nothing that concrete happened. I can say that I had a terrific time reading in the beautiful SAIC ballroom as part of the Quickies/Burrow Press event, I got to meet one of my halfie heroes – the Afro-Viking Heidi Durrow, I saw a bunch of out-of-town friends, and I got to bust out my patented dance move, the Sexy Push-Up, at Literature Party. Fun was had, and more importantly, I felt like I was part of something. This was my third AWP. I went to my first during my first year as a grad student at Columbia, and I remember feeling overwhelmed by options. At times, it was inspiring to know that there was so much literature going on, but I remember feeling like I didn’t know where to begin. Over the last couple of years, through being in school at Columbia, I feel like I’ve gotten a better idea of who I am as a writer and what I am looking for in literature and in publishers. And this stronger sense of myself, as gained through school, lead to a great experience at this conference.