I recently sat down with MFA Candidate Joshua Young to talk about his new book, When the Wolves Quit: A Play-In-Verse, out from Gold Wake Press. We met at The Daily in Lincoln Square on a bright, clear Sunday, drank PBR Tallboys, and generally had a great conversation. The highlights are below.

Let’s start at the beginning. Tell us about the book, and how you got the idea for the project.

The book is set in a small town in northwest Washington State, near where I went to school. It’s a town full of secrets and gossip. The action starts with the disappearance of the town’s preacher. From there the town unravels and the action unfolds. The book deals with characters who fit into a mold at the outset and try to break free from that mold. Some are successful, others are not. It was important to me to have three levels active: the action of the story, the action on the stage in the reader’s mind, and the reader reading the book, privy to information about actions that take place off stage as well as the letters interspersed throughout.

I  have a background in fiction, so I originally conceived of this project as a novel. As I was working with the material, I came to the realization that prose poems made more sense as a form for what I was trying to do. I was in my MA program at Western Washington at the time, studying with Oliver de la Paz. He was super helpful in working with me to formulate the end result from the initial poems I wrote in one of his classes. Oliver’s very project oriented: he can look at a series of poems and figure out how to put it together, how to work the narrative arc, where to start it, etc. He was a huge help. 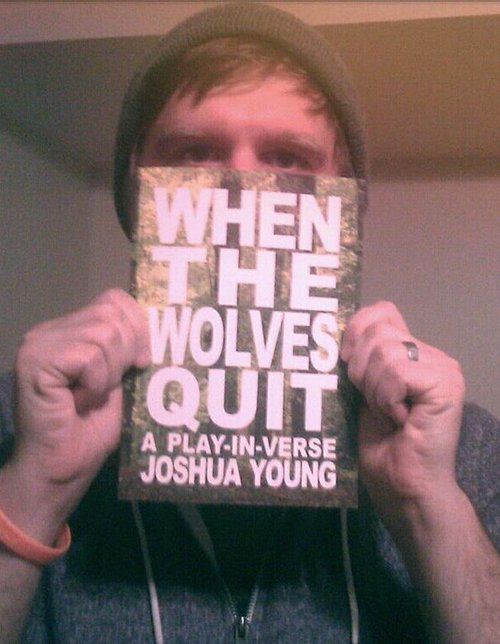 When the Wolves Quit

You mentioned the influence of Oliver de la Paz and your graduate program at Western Washington in the writing of this book. How has the environment at Columbia affected your writing thus far, and how has it informed the material for your next book?

Columbia has been awesome. The openness of the vibe on the campus both with the students and the faculty has really reminded me of the experience I had at Western Washington. Tony Trigilio, in particular, has been very supportive of my projects. I’m in his office constantly. It’s also been great to work with Lisa Fishman, as her aesthetic is very different from Tony and the combination is adding something to my work.

Being in Chicago has made me write in a new way about Washington, which I still consider home. I have two projects going right now. The first is a series of poems about the punk scene in Seattle in the 1980s. That’s the one I’ve been working with Tony on, and the one he’s most supportive of. The second is something tentatively titled “neighborhoods,” and it’s more of an association of various events from my life to this point. That is the project Lisa is most excited about.

I’m definitely someone who likes to have multiple projects going on at the same time, because I flip back and forth between them when I’m feeling stuck or stale. Right now I’m most excited about the punk project, but I still sit down with neighborhoods now and then. It’s great to have two strong influences and to be able to work on a project with each.

You talked about liking to have multiple projects at once. How do you decide when something is finished?

There comes a point with a project where I intuitively know that even if it’s not totally complete, the project is whole. I have every piece I need. With Wolves, that last part was the letters. I realized I needed to finish those letters and the thing would be all there, so I sat down at just plowed through a whole bunch very quickly. I ended up using, maybe, half. But that was the real point where I knew I was going to finish. From there, it’s going through, rearranging, cutting, rewriting stuff that’s bad– but it feels like the final touches. The end is in sight.

At some point you realize that you could always keep going, but you’re not even sure anything is being added, and then it’s ready to submit. A lot of times this happens when you know something is whole and you’re also totally tired of it. That could very well mean it’s done.

You’re the guy in the program who seems to be celebrating the most publications lately. I know you have some strong feelings about this, so have at it: what is your advice to people either in or entering graduate school?

Oh man. You talked about publications and that’s my first big piece of advice: finish work and then submit it. It’s great to be focused just on improving your writing, but if you want to teach, you have to start doing the legwork now. Finish work and submit, finish projects, go to conferences, network, do all the stuff that poets need to do that doesn’t involve writing. That other stuff is very important. This really doesn’t sink in with a lot of people, but part of the life of a poet has to be grinding. Sometimes you might want to take it easy, but this time is really precious and you have to take advantage of it.

I’m very lucky with my wife, because she’s taken on a lot of the responsibilities of raising our 15-month-old son and has given me time to work, submit, network, and basically “do” graduate school. I owe her so much. It lets me find the time to do extra. That means finishing a chapbook and submitting it to twenty presses in hopes that one works out. That means reading through journals and sending out work that fits for them even when I’d rather watch TV or, you know, do whatever. Graduate school is a great time, but you really have to focus on getting the most out of it.

I think that’s my biggest thing: the mentality of getting the very most out of graduate school. It’s a huge investment of time and money, and if you have goals (and you should), you should make sure you’re taking the steps and doing the work necessary to reach those goals.

When The Wolves Quit: A Play-in-Verse is available from Amazon, BN.com, and Powells. You can read an excerpt from the book published in alice blue review here.