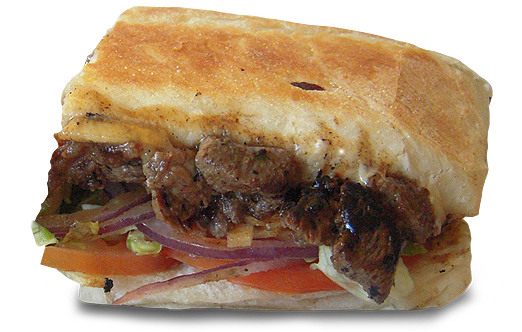 The Chivito from Cafecito

Columbia College Chicago is in the South Loop at the bottom of downtown. It was a seedy area up until around ten years ago. Says Wikipedia, “The South Loop was historically home to vice districts, including the brothels, bars, burlesque theaters, and arcades. Inexpensive residential hotels on Van Buren and State Street made it one of the city’s Skid Rows until the 1970s. One of the largest homeless shelters in the city, the Pacific Garden Mission, was located at State and Balbo from 1923 to 2007.”

Recently, a handful of colleges such as DePaul and Roosevelt opened campuses here, and Columbia is the largest property owner in the neighborhood. With all of this development came new businesses catering to college kids. Unfortunately, none of these businesses are brothels or burlesque theaters, but there is a variety of chain restaurants. So, if you want to give your meal zero thought, you can go to KFC, Subway or Dunkin’ Donuts at Wabash and Harrison, or Panera, Epic Burger (Has caused epic trips to the bathroom for me and my coworkers) or Chutney Joe’s (The Chipotle of Indian food) at State and Congress. But, if you want to support smaller businesses or eat something unique, here’s a list of…

Good Places To Eat Near Columbia College Chicago**Note, the restaurants with Dearborn addresses are on Printer’s Row, a former industrial area that used to house bookbinding factories but is now mainly fancy lofts. Printer’s Row has cool architecture and an upscale vibe.** 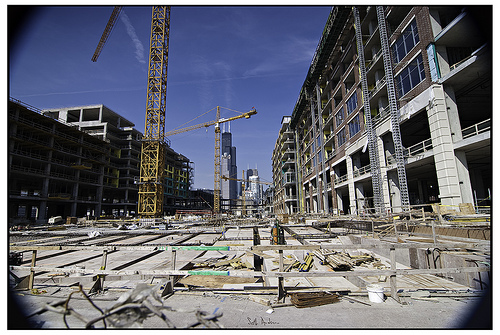 26 E. Congress, west of Wabash
It’s easy to miss this Cuban sandwich spot since it’s tucked between a Dairy Queen and a hostel, but once you step in, the line to the door proves that it’s a well-kept secret. A Cuban sandwich is a pressed sandwich featuring ham, roast pork, pickles, cheese and mustard. Cafecito’s Cubano is terrific, but check out the other pressed sandwiches on their menu such as the steak ‘n’ eggy Chivito, the vegetarian Jardin or their take on the turkey club, the Pavo. Get a side of plantain chips or one of their excellent salads, like the hearts of palm, or try the breakfast and tell me how it is. Sandwiches are in the $5-7 range.

634 S. Michigan at Balbo
This is the sandwich shop on the ground floor of the upscale Spanish restaurant Mercat a la Planxa. Every day, they have a $5 sandwich special that comes with chips and a cookie or a piece of fruit. I like going on Turkey Tuesdays for El Born, a turkey and bacon creation on a sundried tomato roll. Otherwise, it’s $6.50 for that meal deal. I won’t lie, the sandwiches are kinda small, but what they lack in size, they make up in taste. And I’ve been known to eat two El Borns because I’m hardbody like that.

Starbucks at the DePaul Center

State and Jackson
What? Starbucks? Here’s the thing: The Starbucks inside the Barnes & Noble at DePaul sells prepackaged Soul Veg meals. Soul Veg makes vegan versions of popular soul food. They’ve got a restaurant on 75th St., but if you don’t want to make the trek, go to DePaul and get a Jerk Seitan wrap or a meal of BBQ tofu, collard greens and their delicious vegan mac n “cheese.” Fun fact: My sister in law served Soul Veg at her wedding, and her meat-eating grandparents had no clue that the food was vegan.

Califoria-style burrito spot. I suggest the Pastor. Good margaritas and, get this, some of the best red velvet cake I’ve ever had. I think they’re some sort of a chain, but I’ve never seen them anywhere else.

Standing Room Only, not Single Room Occupancy, though perhaps named that as a tribute to the neighborhood’s seedy origins. SRO is a burger grill with sports stadium kitsch on the walls. They’re known for having a terrific turkey burger.

George’s Vs. The South Loop Club
Balbo, between Wabash and State

These are the two bars that Fiction Writing people tend to drink at after class, and we’re pretty divided as to which place is better. I prefer George’s, a dive bar with cheap draught beer and weak liquor drinks, but some people like the South Loop Club because it’s a tad cleaner and they serve food. Me, I think the South Loop Club is an overpriced armpit with too many goddamn televisions. I always feel like I’m being hustled when I’m in there because the waitstaff ask if I want another round before I’m done with my drink.
As Kurt pointed out, “I’ve never seen the same waitress in their twice. It must suck to work there.” No one will bother you at George’s, it’s less crowded and easier on the wallet, and if you absolutely must have some greasy food, go next door to Harold’s.

Get to know the Fiction Writing department by reading its students’ work. The Handshake is a print and online journal with a new journalism aesthetic. It’s run by Fiction Writing grad students Dan Duffy and Kevin Kane. They just published the short story “Pete, The Professional Professional” by fellow grad student Wyatt Roediger-Robinette.