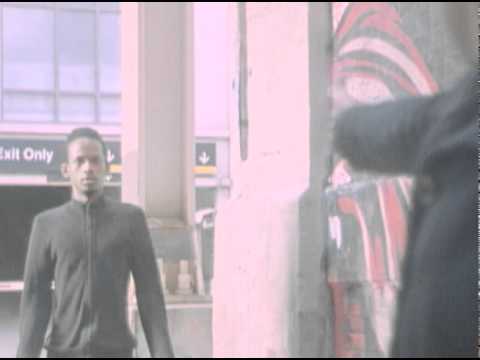 The Grant Park project is the initiation into the Film and Video department. It sounds simple enough. You’ve got ten shots, two rolls of film, two actors, and two hours to come up with a story. That’s what I’m talking about…filmmaking!

We all have different processes when starting a project. On this project, I decided to scout the area and take my story ideas from the surroundings. For the uninitiated, scouting is when you look for a location to shoot your film. I decided against using a bench, because I thought a bench was too obvious a choice. However, those giant walking leg statues were not. And even if they were, it didn’t matter because those legs are very cool.

Then I made my way over to the bridge that led to the Metra station. I thought a shot of someone walking over that hump on the bridge would be visually appealing. In the end, I just couldn’t go through with that shot. The concept seemed too safe. The same could not be said for the walking statues. They looked so amazing. In fact they were perfect for an editing trick I planned to try.

The next place I decided to try was Buckingham fountain. Oh, no I didn’t…oh, yes I did. I walked all the way over to that stupid fountain. The lesson learned at this point of my adventure was that you should wash your hands at least twice daily. Anymore than that and people will think you are unbalanced. So I got to the fountain, looked around and realized this was way too far to walk to in the allotted time. I then decided to check close to the building. I found two really cool places. One was a park with a very “Narnia” looking stone desk and sculptures of animals. The other was in an alley around the corner. There was a wall with a giant poster of a communist looking woman in red.

Next came storyboarding. This is when you draw pictures of the action you want to shoot on index cards. Well, I’m a terrible artist. Stick figures were all I could muster. However it all worked out. My drawings did the job and made a little sense. The next day we had our shoot.

It was a blast. I got to yell at people, and act like I knew what I was doing. I say ‘act like’ because I made a million mistakes. We shot on a Bolex camera. These are the kind they used in WWII when you see the newsreel. What’s interesting about the camera is that it requires you to wind it up…which I forgot a few times. We also had to use a light meter, which I was terrible at reading. The worst part was adjusting the f-stop. This determines how much light goes into the camera. If you use the wrong f-stop you may overexpose your film resulting in a white washed image. I did this a few times too. Anyway I survived and got my shots. Since then I’ve been nesting in the editing room putting my film together. Needless to say I’m happy with how it turned out.