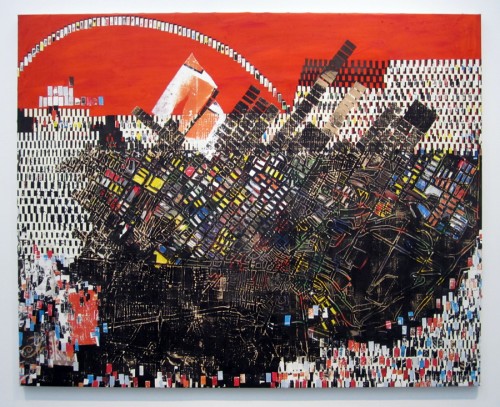 Before the school year begins I like to take one last breath of that summer air and try to take the time to go to the MCA or the Art Institute to get inspired.  As a result, I had the chance to see a Los Angeles-based artist, Mark Bradford, and his exhibition at the Museum of Contemporary Art Chicago. Oh, and I also found out that students at Columbia College Chicago are admitted free to the MCA! Just for your information.

Being a mixed media artist myself, I found Bradford’s work innovative and captivating. I found myself standing in front of many of his works focusing on the amount of layers and trying to understand the process he used to create each work of art.  After I observed the “making” of the project, I then tried to figure out the purpose.  The works appeared to use color, pattern, and texture to create an overall image of a mixture of a terrain and street map.  After reading about his intentions, it appeared that he would “focus on a detail of a city and abstract it to create his own subjectivity.”

In Mark Bradford’s, Scorched Earth (shown above), he focused on an event that happened in 1921 in the city of Tulsa,Oklahoma.  The color palette of red and black refers to the race riots that ended in the burning down of at least 30 city blocks of African American homes.

As a future Art Educator, I believe that art can be connected to other area’s of curriculum and that it is important to focus on these area’s to help create connections between the art and real-life.  History has such a big connection to art, and it is important as a teacher to go to new exhibitions to see what can be used in the classroom to create new lessons that can easily be connected to art that is being made now.

Check out Mark Bradford’s Exhibition at the MCA through September 18th.