Originally from the Greater Boston area, John Malone was first bitten by the acting bug when he was chosen to play the title role in his junior high school’s production of “You’re a Good Man, Charlie Brown.” From that moment on, he knew he wanted to be an actor.

Following this journey, he attended an all-boys Catholic preparatory school (St John’s Prep in Danvers, MA), where he divided his time equally between his studies and the drama club. He devoted many, many after-school hours to rehearsals and performances, but he was also a very good student. He worked hard and got excellent grades. From there, he moved on to Harvard University, where he performed the same balancing act: studying Chemistry by day and participating in numerous productions with the Harvard Radcliffe Dramatic Club in the evening.

Upon graduation, he accepted a job as an Applications Chemist, but continued the same pattern that he’d followed in school: work by day, theatre by night. After several years of living this double life, it finally dawned on him: he was far happier in his acting life than he was in his working life. After much deliberation, he finally decided that it was time to merge the two, so he made the big move to Los Angeles to pursue an on-camera acting career. He’s now lived in L.A. for over 20 years. His acting career has had many ups and downs, but it wasn’t until he discovered voice acting that he finally found his niche.

In the Loop had the opportunity to learn about the voice actor based in Los Angeles firsthand.

In The Loop (ITL): How did you first know voice acting was something you wanted to do?

John Malone (JM): I’ve been an actor since I was a child, so performing has always been a passion of mine. One Christmas, my grandmother gave me a cassette recorder with a microphone, and it was my most prized possession. I would read books on tape, perform little sketches I’d written and get my brother and my friends involved. I loved cartoons and admired talents like Mel Blanc who provided all of the crazy voices. It wasn’t until after many years of chasing an on-camera acting career, however, that I even realized that voice acting was something I could actually pursue. Out of sheer curiosity, I started studying with a coach, working first on reading commercial copy and developing my skills in that area. Once I’d done my share of reading, recording, listening, evaluating, re-reading, re-recording, etc., it was finally time to begin working on my first VO demo.

It wasn’t until much later, however, that I understood that social media, online casting, and home recording studios had really changed the game. That was when my voice acting career really began to take shape.

ITL: You got your Bachelor’s in Chemistry and began your career as a marketing manager — what inspired you to instead pursue a career in voice acting?

My first position after graduation was as an Applications Chemist. Then I was promoted to Technical Sales Specialist. Then to Product Manager. Each promotion brought more money and more responsibility. I was succeeding professionally, but it wasn’t personally satisfying. What I did find satisfying was the time I spent outside of work performing in various community theater productions. That was my happy place. After five years of balancing the two, I finally decided that I wanted to give an acting career a shot. You only live once, and I didn’t want to have any regrets. It’s been a long road from there to the voice acting career I have today, but I’m very glad I decided to give it a go.

ITL: You’ve gotten the opportunity to work with various clients, such as Poptarts and Honda — what were those experiences like for you? (Did you audition for the role or have a recruiter handle that and you just got the job? Did you go on site or to a specific studio you had to record at, or did the client have you record through your own means and send a file to them? We have no idea how to specifically ask for details on what the experience is like because we aren’t sure how jobs like this generally go! But if you could tell us about it in your answer that would be very informative!)

JM: Some VO gigs come as the result of submitting an audition through an agent. I’m represented by William Morris Endeavor in Los Angeles, but I also have several regional agents in different places like Chicago, Atlanta, Austin, Minneapolis, Washington D.C., etc. I recently booked a national Raisin Bran commercial via one of my regional agents. The vast majority of the time, my agents send me audition notices via email, I record from my home studio and send the audio file to them. In the case of William Morris, I would often go into their office to record in their studio with assistance from one of the booth directors, but that has changed since the COVID-19 outbreak.

Other opportunities might come as a result of membership in a “pay-to-play” site, which is basically an online marketplace that you can join to get access to voiceover auditions. The Honda commercial you mentioned came as a result of a relationship that I’d made on one of these sites.

Many of my clients have come as a result of my own self-marketing, either via email, social media, referrals, in-person networking, etc. The Pop Tarts commercial you mentioned came from a relationship I’d developed in a Facebook VO group.

Most of my auditions and most of my work is recorded from my home studio – The Malone Zone 🌀! The finished audio is usually sent via email or some other file transfer method. A couple of times the producers have used my audition as the final product, which is great because it means I don’t have to do anything else besides cash the check!

Sometimes, I work live with the producers remotely using a software package called Source Connect. My studio is connected directly to their studio, I can hear them giving direction in my headphones and they can record what’s coming from my microphone on their end. I’ve recorded in other people’s studios plenty of times, but it’s less common for me. Now that we are all practicing social distancing, it’s VERY important for voice actors to have home studios with the ability to connect remotely. I’m sure that will be the case for the foreseeable future.

ITL: Do you have a favorite client that you’ve worked with? Or, rather, which voiceover has been the most fun?

JM: I’m thrilled about my recent Raisin Bran commercial because it’s currently airing nationally (https://www.ispot.tv/ad/nVJ9/kelloggs-raisin-bran-combination?fbclid=IwAR2fnKSC15t5LvdGYsLAIhMr6riNGcaZYM82IT25tnCiVEBhSPN0q_U6QIQ). I had one client that used me as their voice for numerous TV, radio and internet commercials over a year’s period, which was also very exciting (and lucrative!) One of my favorite clients is actually a German company that sends me e-learning scripts to read. It’s not particularly exciting work, but the pay is decent and this client keeps coming back to me, which is very gratifying.

ITL: In your free time, what are your hobbies? (We’d like to know more about you as a person! What’s the man behind the voice like?)

JM: I like to watch movies (my favorite movie is “Goodfellas”), listen to music (my favorite band is “The Beatles”) and play games (my favorite game is “Trivial Pursuit”). I also love playing the piano. I’m not very good, but I have fun doing it. I still enjoy acting on stage and on-camera. I don’t get many opportunities these days, but I usually seize them when I can. I used to create silly little videos on YouTube, but it’s been a while since I’ve done that (https://youtu.be/WWvsxqx5P_Q). I recently had my first starring role in a feature film called “Derelict” which just started streaming on Amazon this year (https://www.amazon.com/Derelict-Malik-Stalbert/dp/B07ZPBM782).

ITL: You do voice overs for quite a few different “genres” — commercial, political, medical, TV narration, etc. Is there a preferred “genre” that you have?

JM: Commercial is probably where the most opportunities are. Animation is lots of fun, but extremely competitive. I enjoy storytelling, so I find audiobook narration quite satisfying. I won a Voice Arts Award in 2017 for my narration of a book called “Dredging Up Memories” (https://www.audible.com/pd/Dredging-Up-Memories-Audiobook/B01MDLMLUV?qid=1586910815&sr=1-1&ref=a_search_c3_lProduct_1_1&pf_rd_p=e81b7c27-6880-467a-b5a7-13cef5d729fe&pf_rd_r=15X99Y506KND6P0PPSZF). The catch is that audiobook narration is VERY time consuming and much less lucrative than other genres for most. It requires dedication and a lot of hard work.

I like to experiment with lots of different genres, so I don’t limit myself to just one.

ITL: How has this industry progressed and changed since you first began your career?

JM: The internet and home studios changed everything. Neither was really a factor when I first started training in VO. Both have leveled the playing field, opened up the industry to more players, but also resulted in many more opportunities. The current social distancing practices have really accelerated the transition from recording in traditional studios to remote recording from home studios. I’m sure recording in traditional studios will return at some point, but a pro home studio with remote recording capability is now crucial for a voice actor to have.

ITL: Do you have any advice for current students hoping to be a voice actor?

JM: Study acting. Voice acting is acting. Period. Your voice is an asset, and the type of voice you have will definitely influence the kind of projects you could be cast in but having a “nice voice” will open fewer doors than you think it will. Find a reputable voiceover coach that you are comfortable with and spend time working on your reads. Don’t rush this step. Everyone thinks it’s easy, you just read, right? No. It takes a lot of time and a lot of practice. You’re learning a new skill and trying to find your signature voice. Don’t hand your money over to a demo producer until you have trained enough to be “demo ready”. It’s a big mistake. You’ll wind up with an expensive demo that does nothing for you but highlight your shortcomings. Take the time to develop. You’ll be glad you did.

ITL: What are some challenges that you’ve faced in this field and how have you overcome them?

JM: Voice acting is very entrepreneurial. You’re running a small business, so it’s important to think like a businessperson. You’ve got to market, market, market yourself. I struggle with this, as do many voice talents, but it’s very important if you want to be successful. I’m currently working with a coach to improve my skills at content creation so that I can better leverage social media as a marketing platform.

ITL: And for fun, if you could pick any client to work with in the future, who would it be and what specifically would you be doing for them?

For more information on John Malone, you can visit his website at  www.MaloneZone.com. 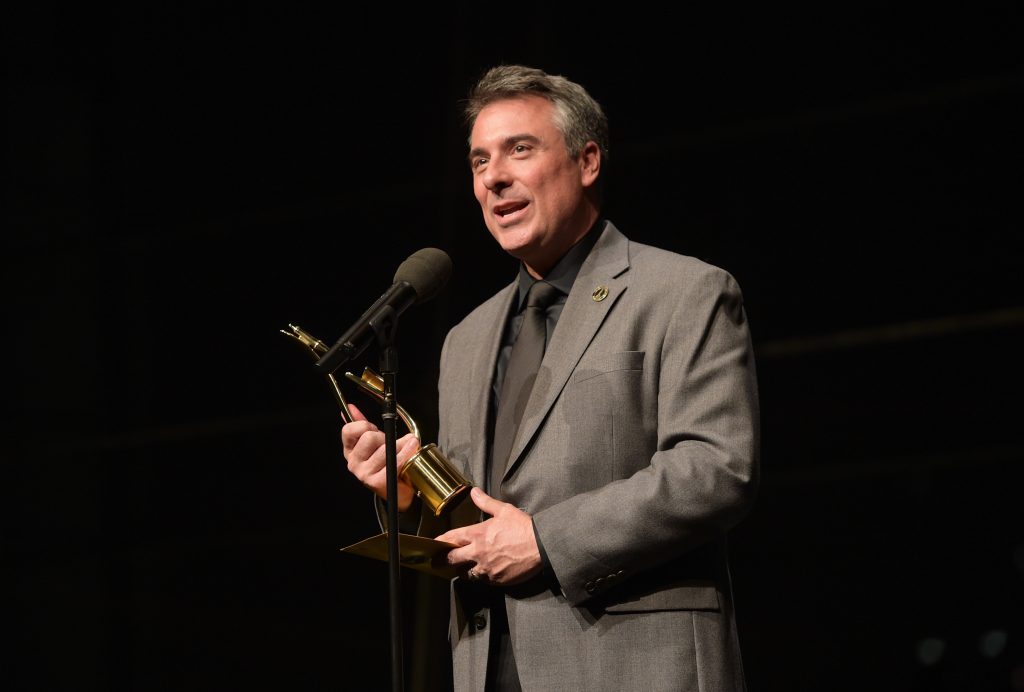