While most of Columbia’s population is still basking in the afterglow of Manifest 2018, our new Creative Director is already hard at work making sure that this spring’s installment of the festival is even better than the last. Lex Heyler, a senior Graphic Design student and Chicago native, has been chosen to create the designs that will soon be plastered on every wall, t-shirt, and poster across Columbia.

2019’s Manifest theme is “Amplify,” a concept that all soon-to-be graduates can get behind. Lex wants to use this theme through their art to amplify the voices of Columbia’s diverse student population. “Raising up the voices of others, whether directly through words or through creative expression, feels like the implicit mission at Columbia,” says Lex. “I thought about the school’s commitment to intersectionality and how that could be carried out through this Manifest theme.” 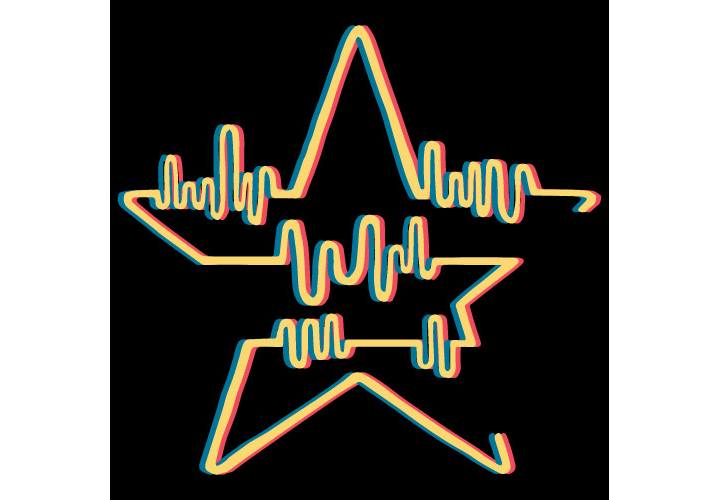 So how has Lex translated that concept into their designs? “I was inspired by the shapes of soundwaves,” they explained. The design for the Manifest star, which is the design that won Lex the coveted position of Creative Director, mimics the look of audio waveforms. To emphasize the idea of amplifying all kinds of voices, Lex incorporated hands into some of their graphics. “I’ve always found hands specifically to be an extremely expressive part of the body, and I felt that including them in my design would allow the visual representations to have more of a voice of their own.”

Lex’s work is also heavily inspired by their early childhood passion for drawing. “My first artistic love was definitely cartoons, especially all kinds of 2D animation. I’ve been interested in art since childhood, and for me graphic design was just the next step from that. There’s something really satisfying about the sorts of problem solving and experimentation that go into creating a clean design.” Lex also sites Impressionism and Japanese Ukiyo-e woodblock printing as some of their inspirations. “I’m very fond of designs which are tightly crafted but still retain an element of artistry or hand-done detail.”

Lex plans to make Manifest 2019 stand out by highlighting the achievements of the graduating class. “In its essence, Manifest is really our big party at the end of the year to celebrate how much we’ve accomplished.” They hope that their creative direction will “get across the sense of celebration that I’ve felt at Manifest.”

But Lex is also excited just to get the chance to make their mark on Columbia’s history. “I am ecstatic to be chosen this year. The amount of creative freedom that I have is like nothing else I’ve done in my field. It’s absolutely the best feeling.”

“What really appealed to me about being director was the ability to see your own work executed on a large scale. There’s something really special about creating a banner design and knowing that at the end of it all you’ll actually get the chance to see that banner printed and displayed in real life.”

The “Amplify” theme has inspired Lex to create some truly memorable and inspiring art, and they can’t wait to see how it integrates with the rest of Manifest 2019’s offerings. “After all,” said Lex, “Manifest is really about showcasing our students. I want to see how I can harmonize with that.”