Artists like Mac Blackout are the type of individuals who are defining modern day Chicago.  Fine art, murals, illustrations, street art, music, and more are all just a few of the ways you can experience the broad spectrum of work that Mac Blackout creates.  It’s no coincidence that the art that Mac makes is as distinct and identifiable as his background and discography in music. Every art project he takes on reverberates with its own unique sound. It’s hard not to look at any of his work and hear something deeply embedded into it.  The quality, volume, and spectrum of his art speaks for itself.

In The Loop had the opportunity to shoot the breeze with Mac Blackout.  He told us about his background, what his influences are, and what’s happening in the near future.

*All photos credited to www.macblackout.com In The Loop: What type of preparation do you do before you paint something (sketches, Adobe, if any, etc.)?

Mac Blackout: It depends on the type of piece I’m doing. The size and the approach that I want to take toward the painting. Some pieces that are more expressive will have less planning and more direct mark making while tighter paintings or large murals will have a lot of planning, preliminary drawings, etc. For large pieces and murals I usually do a pen and ink drawing, plan colors/make adjustments and finish the plan on a tablet. I use Procreate for that.

ITL: Where does your distinct visual style come from or how did it originate?

MB: Development of style is a life long process and not something that is a conscious choice. I believe that we’re born with certain instinctual leanings that comprise some elements of our “style” and how much you utilize or apply and accept those leanings gives your work a distinct and unique feel. Development as an artist is all about balancing that with influence, learning and passing that energy and knowledge on through your work. Accept and learn from other artists in the past. Build on what they’ve done and the creative energy that they’ve given to create something new. You’ll have endless ideas along the way. It’s all about realizing them and creating something new, building more creative energy and passing that on through your work.

Here’s a short list of inspirations, interests/experiences that have fueled my creativity: 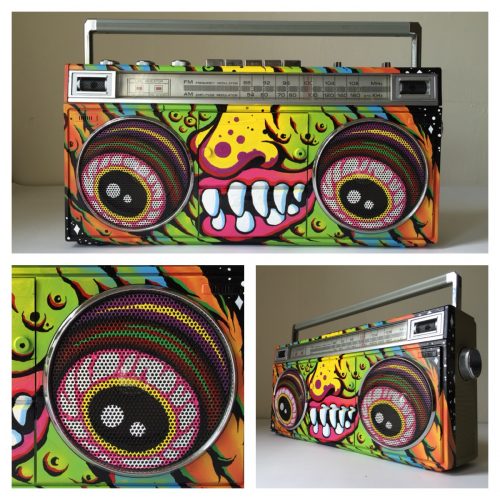 ITL: How many doomboxes have you created?

ITL: At what point in your process do you decide on the color schemes for your work?

MB: It’s sometimes at the beginning and other times it’s after I’ve created a black and white drawing and I’ll add color to that. Other times the entire creative process revolves around color and how colors work together.

ITL: What other artist inspire you?

ITL: What do you like about Chicago and the art scene?

MB: I’ve always been inspired by the city. I take the good with the bad and love both. As far as art and the art scene… I love the fact that many people in general support and care about art in the city. The more people support art the more art will thrive. The more people see art the more they will be inspired by it. Public art and the mural boom right now is contributing a lot to the creative health of Chicago. I’m happy to be a part of it. There are a lot of great artists here I’m glad to have met and befriended. 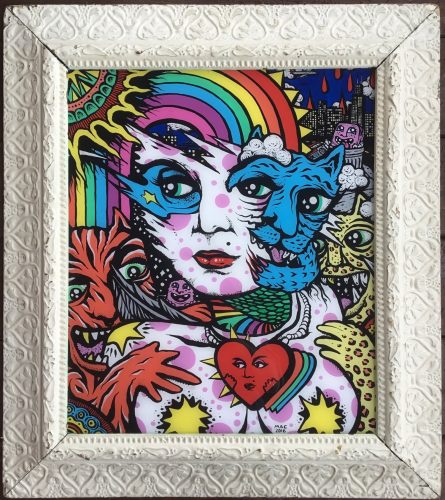 ITL: What types of things influenced you or made an impression on you as a child?

MB: Most of my major interests and inspirations are listed before. Generally growing up in the 70s and 80s had the biggest influence on me. The culture, counterculture, media, technology and lack there of.

ITL: When you graduated college, what types of creative work did you first start doing?

MB: When I graduated in 1999 graffiti wasn’t respected in the art world. It was complicated… hard to make a living being true to yourself. I was still growing artistically.  I started a band, The Functional Blackouts, had 4 other bands over a 15 year period working dead end jobs all day and writing music all night. I put out 10 full length albums on various independent record labels with those bands and writing solo. I’ve just recently been able to make art my full time work. I’ve been focusing on that for the past 3-4 years.

ITL: How much have you grown as a visual artist from “starting out” to where you are now?

MB: I’ve been growing as an artist my entire life and I don’t think I’ll ever stop. As long as you’re open to inspiration and you continue to formulate new ideas I don’t see how you could stop growing. ITL: What is currently on the horizon for your art?

MB: My first monograph “Madman’s Eye: The Art of Mac Blackout” is coming out December 8th, a 240 page book published by HoZac (also an independent record label here in Chicago.) That night I’m having the opening of my solo show at Galerie F. I’ll be curating a group show in February at Uncle Art Gallery in Humboldt Park and I have a three person show coming in March with Thor and Ben Lyon, two of my favorite current artists. I’ve got murals planned and another solo show next Summer. I have a second book already in the works. I’m always looking for mural opportunities so don’t hesitate to contact me.

ITL: You are one half visual artist and one half musician, what can you tell us about your extensive background in music (or about the recent and awesome Burning Alive LP)?

MB: The underground punk/rock n roll scene means a lot to me. I’ve had many bands and met some of my best friends through music. I’ve had some seriously wild times and poured my soul out across to country on many tours. Too many stories to tell here. There’s a big chapter on music and my music related art in my book. I’m continuing to practice, write, and record music regularly with my band, MBB. Our 2015 LP “Burning Alive” finally came out this year on Heavy Dose Records. We play out once a year and try to make it a special event. Focusing on having fun with it. For more art, music, and info on Mac Blackout feel free to visit…

This solo exhibition celebrates the release of “Madman’s Eye: The Art of Mac Blackout,” a 240 page monograph and definitive guide to Mac’s work. The book covers Mac’s life from his early days as a pioneer of the graffiti movement in Indianapolis, through his time as a raucous fixture in the Chicago underground music scene, to his recent street art, mural, and studio work.