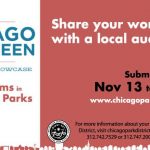 What is the Chicago Onscreen Local Film Showcase?

The Chicago Onscreen Local Film Showcase was created in 2014 as a new component of the Chicago Park District’s popular Movies in the Parks program. The goal of this initiative is to enhance the offerings of the annual summer tradition by adding some local flavor, and to feature locally-produced and Chicago-focused independent features, documentaries and shorts with free public screenings in the city that inspired them.

How does it work?

The Chicago Park District will accept submissions of films for Chicago Onscreen through Thursday, December 31, 2015. All submitted works will be evaluated by a selection panel, and a final program of official selections will be featured as part of the 2016 Movies in the Parks summer season. Screening dates and locations are chosen at the discretion of the Chicago Park District.

What’s in it for me?

By submitting a film for consideration, you acknowledge you have read and agree to all guidelines listed below.

1) The number of films chosen and the location(s) and date(s) of screenings will be decided at the discretion of the Chicago Park District.

2) The Chicago Park District is not responsible for submitted DVD screeners that may be lost or damaged during shipping, but will notify entrants of damage and request a new copy.

3) Selected entrants will be notified directly in March, 2016.

5) Films submitted must be the original work of the person or persons submitting.

6) Submitted films must have been produced in the past 3 years (completion date no earlier than November 1, 2012).

7) Films must have a demonstrable and significant to Chicago or any neighborhood/community therein (Production/shooting location, filmmaker residence, documentary subject, etc.)

8) Films do not need to be rated, but must be the equivalent of MPAA Rating PG-13 or lower to meet Movies in the Parks screenings standards. The Chicago Park District will make the final call regarding appropriateness of content.

9) Short film submissions must be no longer than 30 minutes.