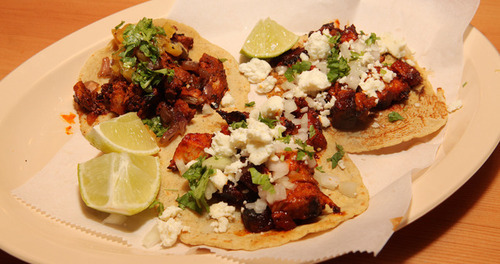 Hey Columbia, Dustin here at the front desk of the Portfolio Center with some quick thoughts before we all check out for Spring Break.

With Graduation looming, a lot of us are likely encountering this word ‘networking’ more and more and just as often being confounded by what exactly it means. It’s vague, important sounding, and we’ve been told it is absolutely necessary for success. But still, what is it? With this in mind, I thought I’d share my own recent experience with networking and tacos.

For my Writer’s Portfolio class, yes this came from a class, I was assigned to contact and interview someone who had a job that I wanted to have myself. Dream Job was the assignment name. After several weeks of talking with my co-workers, getting suggestions, and making email contact with my interviewee, Ben Tanzer btw, a great author and equally great person, I found myself (way under-dressed) at a party for his new book’s release.

Who else was at the party? A ton of people from the writing and publishing scene in Chicago and elsewhere and absolutely nobody that I knew. So, after listening to the readings and saying hi to Ben, I was ready to go home, content with the night. But instead, I decided to introduce myself to someone standing nearby. Turns out we had both done NaNoWriMo before and were both in the middle of writing some big projects. He then introduced me to someone else, then someone else. By the end of the night, it was just me, the author I was there to interview, and three or four of his fellow writers and editors, all of whom were more than willing to talk to me not just about writing and books, but as an equal, an experience I won’t forget.

This led to a long, hilarious, and eye-opening conversation between us all in the lobby of the hotel the party had been held in, before finally being capped off by myself, Ben the author, and his friend, a writer from Kentucky, all walking down the street for midnight tacos at Five Faces. It was the best networking experience I have had thus far, mainly because it showed me how simply the whole process can snowball. And just so it’s clear, I hadn’t even done the interview with Ben yet, this was all just an added event I decided to check out last minute.

So my point with all of this? As one of my new-found acquaintances put it, any opportunity, no matter how small, is better than no opportunity at all. This whole night came from a class assignment, and a random literary event on top of that. So if you’re in the position I have been, not feeling fully immersed in your industry or just wondering how to get your network going more, don’t fret. Search out any opportunity you can, treat class projects like this one as something more, a real chance for you to grow, and I think you’ll be surprised by what happens. Just don’t treat anyone like you want to get something out of them and odds are they’ll treat you well back.

And most importantly, when somebody new to your network asks if you want to go get tacos with them at midnight, Hell yes you do!