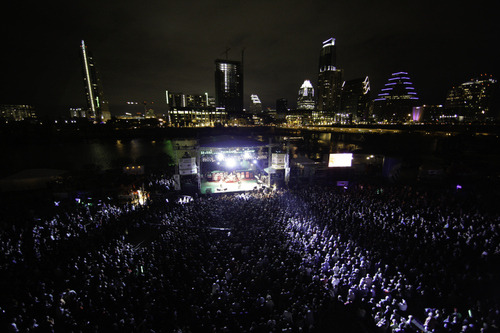 Apologies for being a bit MIA the last couple weeks. I have a good excuse as I was prepping for the annual South By Southwest Music and Media Conference, and then attending it as well.To get a little vibe of what the week preceding SxSW involved, I spent days scheduling and prepping for interviews, planning what I needed/hoped to cover, researching, and also making last-minute pitches (not to mention completing the normal assignments I have each week, along with teaching/grading papers). Once I arrived in Texas, I interviewed nine bands in half hour back-to-back segments for five straight hours on a sunny day poolside for Chicago Public Radio (I know, life’s rough). I interviewed Pretty Good Dance Moves, Paleo, Ezra Furman, Joe Pug, Skybox, White Mystery, Anni Rossi and Via Tania, all very talented artists from the Chicago area, and if you click on the links, you can hear the private poolside sessions we did. Only some of the interviews are up, however all of the live performances are available (and they’re cool, so check them out). I also interviewed Horse Feathers, who live in Portland, but were ideal for our acoustic sessions. I went to day and night shows, I ran around, I wrote, took photographs and saw a bevy of great shows.

When I returned to Chicago this past week, I culled a Day One, Day Two, Day Three and Day Four blog for Chicago Public Radio as well. Another assignment I completed was for the radio industry website, Radio-info.com. Additionally, I set up and conducted a second interview with Via Tania, which I just edited audio and wrote the script for this weekend. It will air on Chicago Public Radio’s “Eight Forty-Eight” program this Friday, April 2nd to preview her Schubas show with Seabear. I also helped organize, conduct and produce on-air SxSW interviews while in Texas for Q101’s Local 101, which I do annually. Finally, I had set up interviews with Chinese bands during the first-ever SxSW Chinese showcase, which had to be postponed until sometime this week as we couldn’t fully coordinate our schedules. I’m still working on a good pitch for that story. And of course, I had my normal assignments, live reviews for Chicago Tribune , a podcast to edit, a few more stories to write etc. etc. also due this past week. Thank goodness it was Spring break at Columbia and there were no classes to teach. I’m not sure I would’ve slept at all (not that I got much of that anyway) if I had even one more thing I needed to accomplish. The results are, after many late nights, I filed all my assignments, but my luggage remains packed on my living room floor a week after SxSW. My place is in shambles.

I’m not writing all of this to make excuses for being too busy or to gripe. Rather, I think it illustrates a snapshot week-in-the-life of how a freelance writer/journalist/producer/host/on-air contributer makes a living in the freelance world. Did I have fun in Texas? Well, sure. It’s kinda hard to complain about a career that involves traveling to a music festival and seeing a ton of live music. But there are challenges, and while it is enjoyable, it is still hard work. First, with the aforementioned assignments and only being one person, I needed to creatively cover some of the same bands in different ways for different outlets. An example of this is my Chicago Public Radio blogging and Radio-Info stories. I had to come up with different angles for the different audiences, but I was working in some cases with the same material. For CPR I gave an insiders/veterans look at SxSW, while my CPR cohort blogged about his first time there. For Radio-Info I concentrated on reviewing the shows, and making a case for why these artists may soon/should be on commercial radio’s radar. Secondly, I was working with two local radio stations who both needed local band coverage. Their audiences are different as well, so I had to mine what made sense for each from the local talent pool present at SxSW and then I had to schedule interviews appropriately (and again, there was much research time involved for each band). I won’t even get into how I on-the-fly ended up taking photos for Pitchfork. I had to provide different photos for each client as well.

This all may seem easy on paper, but it is not. Knowing what your client needs, the audience needs, and how to deliver this freshly with unique pespectives all from one particular event, is a skill worth honing, and an imperative one for a freelancer. You can’t give the same story to the different clients (well with the exception of wire service stories. Also, I suppose there are some out there who do that, but I guarantee it’s not what most editors want. I know, I was an editor. Exclusivity still means something to most places with journalistic integrity).

So while at the base of a journalist/writer career you need to have great writer/reporter skills, you also need to be creative in making the most of your work, without sacrificing what you provide. You also need to know how to hustle. It truly is a dance, but one that reaps many rewards if done gracefully.

It’s also interesting to note that this year, after a decade of covering SxSW for various traditional print publications, every assignment I had involved radio. This leads me to another important point when freelancing. Diversity is key. It is my writing ability that opened the doors into the broadcast journalism side of things. It’s a long, meandering story, which I’m sure I’ll share in another post, but suffice to say having broadened my scope, using the talents I had, coupled with an eagerness to learn new skills (audio software, audio editing, producing) was something invaluable to me surviving in this ever-evolving media landscape.

There are many ways to carve out a living in almost any discipline, knowing how to adapt to the changing times and get the most out of every experience can help grow your career, even (and especially) in this recession market.

Previous Article Do It For Iron Maiden … Communique #2
Next Article   SEED: Planting new paying possibilities for writers and photographers