The new collaborative project Sin Eaters joins the intestinal fortitude of Kellen Walker, Mike St. John, and Moe Yousuf in a competitive eating performance team whose motto is “You are what we eat.” The three are investigating various aspects of food, its origins, preparation, and its ultimate destinations and forms in the Sin Eating project, which began this past June in Chicago’s Co-Prosperity Sphere gallery. In three separate performances at Co-Prosperity, the threesome competitively ate spaghetti, pie, and grilled cheeses that symbolized confessed sins of participating audience members. Their aim is to hark back to the tradition of the medieval sin eater. This would have been a lower caste member of society appointed to eat bread over the recently deceased, with the aim to absolve any sins they might have had during their life. 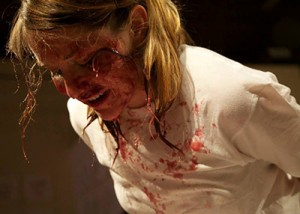 The trio engages the audience with participatory exercises that include eating homemade dishes they prepare and bring to the performance. Their short piece Comfort Food explores the relationship between consumption of comfort foods and feelings of guilt; in Peccadillo Pie, audience members are encouraged to discover the artists’ white lies, bad habits, and faux pas by choosing which sins will be the groups’ “just desserts”; and the Pareidolia Picnic creates a grilled cheese eating competition celebrating the phenomenon of seeing faces in random images. 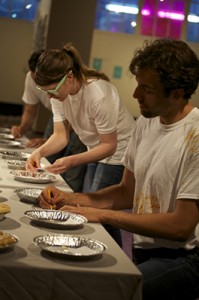 This September the competitive eating team is headed to Lawrence, Kansas for an artist residency at Pilot Balloon, an new experimental space specializing in “jaw-droppingly unexpected, unique, experimental, and exploratory artwork in all genres and media.” They will be joining artists Matt Hislope and Josh Meyer of Rubber Repertory Theater from September 4–11 in an old church in downtown Lawrence that has been converted to artists’ work/live space. The residency provides live and work space (including laundry and wi-fi) and some amenities for only $50 a week per artist, but board, transportation, and any other materials are the responsibility of the resident. to that end, the Sin Eaters have launched an IndieGoGo campaign to help fund the balance, much of which will probably be earmarked for groceries.

For more information on the artists and the project, click here.