Jackie McGill, a third-year Book and Paper MFA, is already actively engaging her interdisciplinary arts practice during non-school hours. In her current position on the creative team at 321 FastDraw Inc. she helps improve corporate communication and information delivery in the world of meetings, trade shows, e-books, and new media publishing.

Chicago-based 321 Fast Draw, Inc. was established in 2011, and two of the three founding partners, Kenneth Nilsson and Salvatore Pecoraro, are 1996 graduates of Columbia College’s Film program. Jackie began working for them a year and a half ago, helping to create a wide variety of customized fast draw video presentations, also known as “white board animation,” “telestrations,” and “speed drawing.” Nilsson, Creative Director and Chief Illustrator for the start-up company, believes that their success is due to how they tell a story. “People don’t pay attention to boring things,” Nilsson said. “You’ve got about 30 seconds to prove to your audience you aren’t going to bore them to death.” Nilsson creates illustrations that hook up to the pleasure centers of the brain, particularly humor, and use it to not only give audiences what they ask for, but what they want.

“There is major interdisciplinary aspect at the core of our process for each fast draw video,” says Jackie, who has been working at 321 FastDraw since the spring of 2011. “We work in a collaborative environment where the idea for each video is passed along from team member to team member, and worked on by everyone: script writer, then to the director, graphic designer, illustrator, and video editor. It’s crucial that everyone works together to produce a successful and engaging fast draw, and that we all know how to inhabit the different roles needed on a successful project team, large or small.” 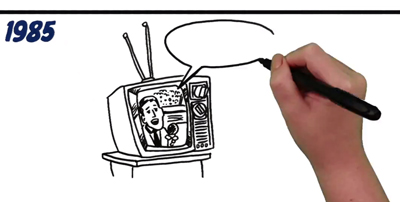 “As an interdisciplinary artist, I feel comfortable juggling different creative roles at work each day, and switching from illustration to graphic design to on-camera production. 321 FastDraw is a place one can keep on learning, and I believe the more creative disciplines I’m exposed to, the better I’m able to understand how they connect with each other increating a whole.”

Jackie’s speed drawing skills can be seen in recent 321FastDraw projects including the Kauffman Sketchbook for the Kauffman Foundation for Entrepreneurs, and a promotional spot for the 2012 NASCAR All Star Races that aired on the Speed Network.

For more information on 321 FastDraw and telestrations, click here.