In her lecture on Sept. 17, Zoe Beloff demonstrated how she relies on “serious fun” when creating her recent work, and talked about ways in which her interest and research into historical events helps audiences better understand present-day social and political actions. 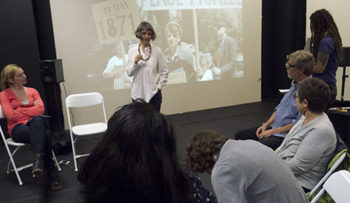 Her artistic practice evolved to include a wide range of media, including film, projection, performance, installation, and drawing. Each project aims to reanimate the past so that it might inform present events, and illuminate the future in new ways. She is currently exploring utopian ideas of social progress, and gave examples of her process from her most recent project “The Days of the Commune: a work in progress.” This performance and video work, which explores utopian ideas of social progress, was started in spring of 2012. From March 3 through May 27 2012, Beloff assembled a group of collaborating performers in Liberty Square (Zuccotti Park) and other public spaces in New York City to work on scenes from The Days of the Commune, a play by Bert Brecht.

As part of what she calls, “staging the unconscious,” Beloff sees herself as traveling back into the past and exploring the world of the imagination, sometimes blurring the lines between historical fact and creative interpretation. “I feel like I’m like a medium, and the voices of the past speak through me. I don’t make it up, I try to conjure it up.” 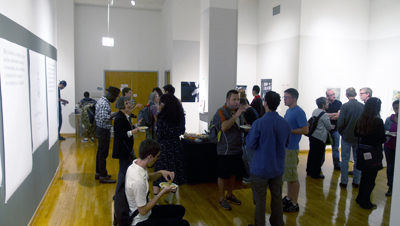 Beloff’s lecture was preceded by a reception in the Book and Paper Center Gallery, and the following day she worked with students in the program during individual studio visits. Second-year MFA Alex Borgen said, “Meeting Zoe beloff was such a pleasure! Her insight to social art really helped me focus on alternative ways to approach art and activism.” 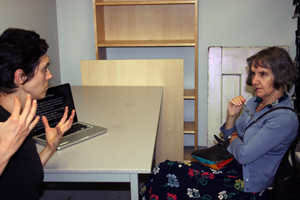 Beloff also spent time with InterArts Media graduate student Michael LaHood in a studio visit. Said LaHood, “I had a great time meeting with Zoe. She gave me some really good feedback on my artist statement, and also challenged me to re-frame how I present my work to the public outside of a gallery setting. I wish we had longer to discuss everything, that half hour flew by so quickly!”

To read more about Zoe Beloff and her work, click here.