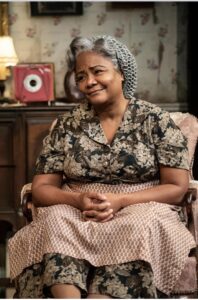 Tonya Pinkins in “A Raisin in the Sun.”

Columbia College Chicago alum Tonya Pinkins ’96 — Tony Award-winning star of such Broadway musicals as Caroline, or Change and Jelly’s Last Jam — will star in the Public Theatre’s off-Broadway revival of Lorraine Hansberry‘s groundbreaking drama A Raisin in the Sun September 27 through November 6 at the Public’s Newman Theatre, located at 425 Lafayette Street (at Astor Place) in New York City. The show, directed by Robert O’Hara, is advertised as an “innovative new production of an American classic [that] fearlessly interrogates the American dream in the face of racial and economic strife.” 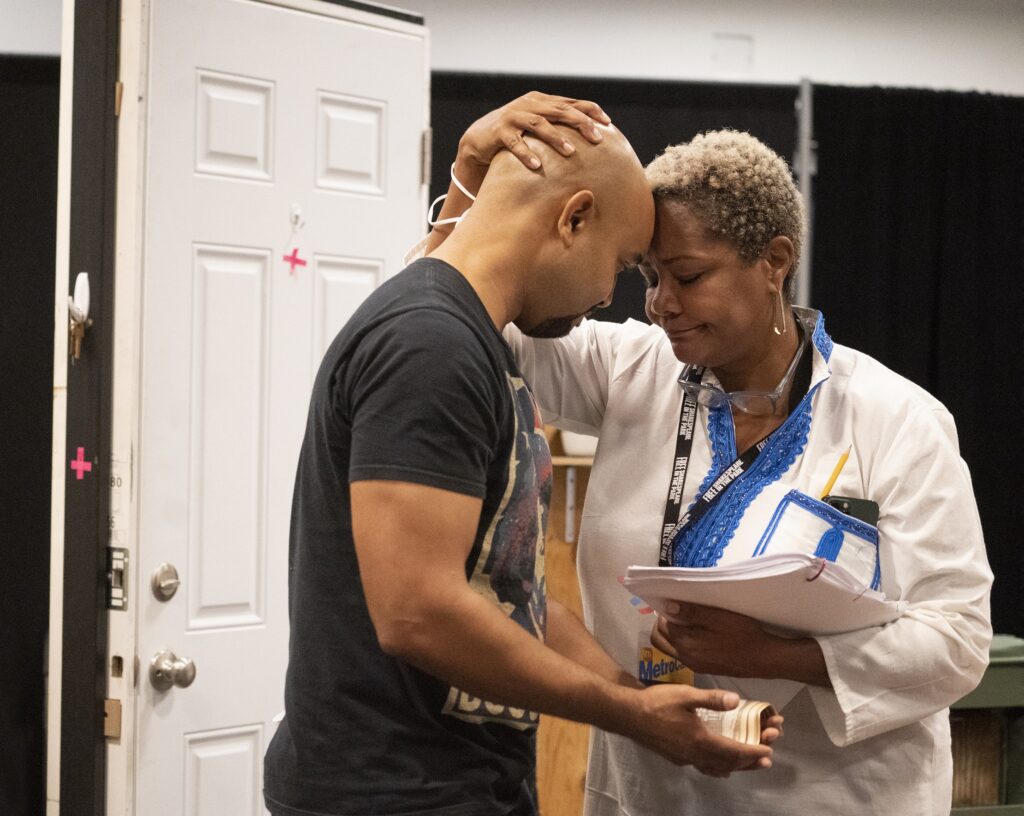 Francois Battiste and Tonya Pinkins in rehearsal for the Public Theater’s production of “A Raisin in the Sun.” (Photo: Joan Marcus)

Lorraine Hansberry’s 1959 play – the first play by a Black woman to run on Broadway – was inspired in part by Hansberry’s own upbringing in her hometown of Chicago. The play concerns a working-class Black family living on Chicago’s South Side. When the family’s matriarch, Lena Younger – the role played by Pinkins – decides to use her late husband’s life insurance to move her family out of their cramped apartment, her dream comes into conflict with the ambitions of her son, Walter Lee, who wants to use the money to bankroll a liquor store. Walter Lee is played at the Public by Obie Award-winning actor Francois Battiste.

Like Lorraine Hansberry, Tonya Pinkins is a native of Chicago’s South Side. As a student at Chicago’s Whitney Young Magnet High School, she participated in the theatre program and also studied acting at the Goodman Theatre’s youth program. She studied Musical Theatre at Carnegie Mellon University and later studied Creative Writing at Columbia College. Besides Caroline, or Change and Jelly’s Last Jam, her Broadway credits include the original production of Stephen Sondheim’s Merrily We Roll Along, the Duke Ellington jukebox musical Play On!, and August Wilson’s Radio Golf. Off-Broadway she has appeared in several Public Theatre productions, including the pre-Broadway run of Caroline, or Change. Her TV credits include the role of Livia Frye on the soap opera All My Children. She is also a filmmaker, whose debut feature film Red Pill was an official selection at the 2021 Pan African Film Festival and won awards for Best Black Lives Matter Feature and Best First Feature at the Mykonos International Film Festival. 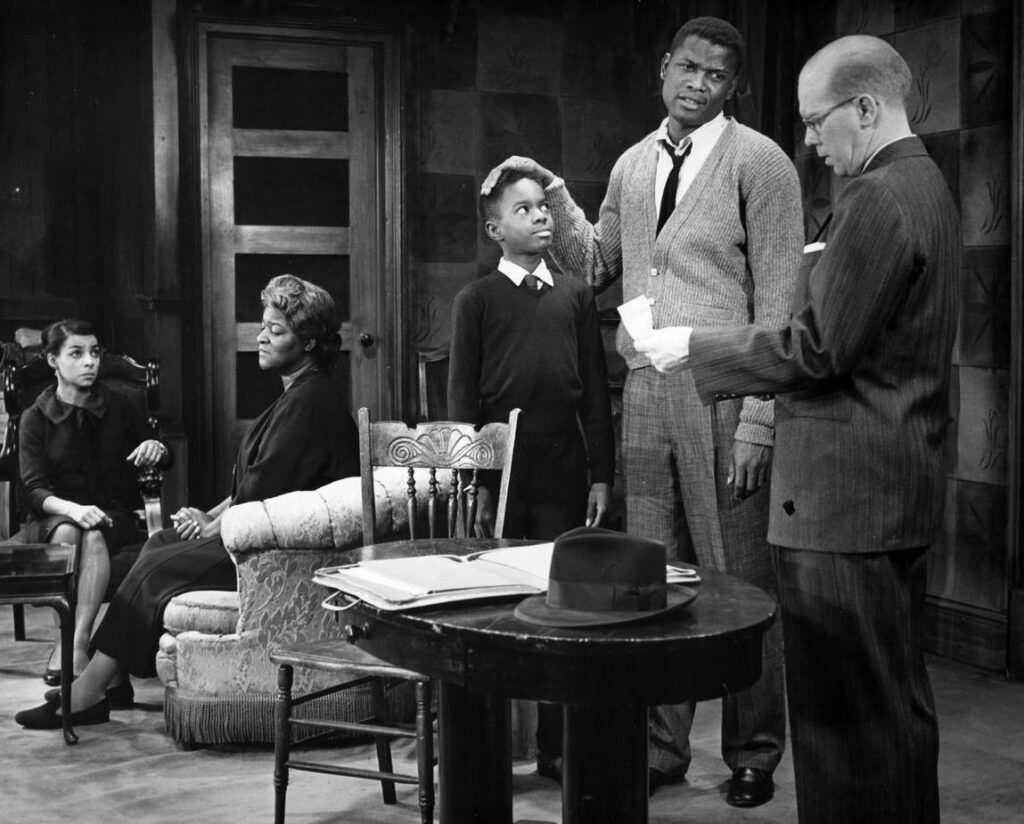 The 1959 premiere of “A Raisin in the Sun” featured (from left) Ruby Dee. Claudia McNeil, Glynn Turman, Sidney Poitier, and John Fiedler.

A Raisin in the Sun premiered on Broadway in March 1959 following a tryout in Chicago – playwright Lorraine Hansberry’s home town – in February 1959 at the Blackstone Theatre, now the Merle Reskin Theatre of DePaul University, located in the same block as Columbia College’s main building in the South Loop. The play’s original cast featured Sidney Poitier as Walter and Claudia McNeil as Lena, along with Ruby Dee as Walter’s wife Ruth, Diana Sands as Walter’s sister Beneatha (a character Hansberry modeled on her own younger self), Louis Gossett and Ivan Dixon as Beneatha’s suitors, then-child actor Glynn Turman as Walter and Ruth’s son Travis, and, in smaller roles, Lonne Elder III, Ed Hall, and Douglas Turner Ward. All of these actors went on to have a major impact on American theatre and film. Poitier became the first Black actor to win a best-actor Oscar (for the 1963 Lilies of the Field); Elder became a well-known writer for stage (Ceremonies in Dark Old Men) and screen (Sounder); and Ward co-founded the Negro Ensemble Company, the first Black American theatre company of international stature. In addition, the original production’s director, Lloyd Richards, went on to become dean of the Yale School of Drama and a frequent collaborator with playwright August Wilson in the 1980s and ’90s. A Raisin in the Sun has been produced on Broadway twice since its premiere: in 2004, with a cast that included Sean Combs, Phylicia Rashad, and Audra McDonald, and in 2014, with a cast that included Denzel Washington, LaTanya Richardson Jackson, Sophie Okonedo, and Anika Noni Rose. In that production, the role of Karl Lindner – a white homeowner who seeks to discourage the Younger family from moving into his all-white neighborhood – was played by Tony Award-winning former Columbia College Chicago Theatre Department student and faculty member David Cromer HDR ’17. Among many Chicago productions, the most recent was a 2020 staging by Invictus Theatre that was directed by Columbia College Chicago Theatre Department alum Aaron Reese Boseman ‘12, a graduate of the Theatre Department’s Theatre Directing program, with several former students and graduates of Columbia College in the cast and production team. 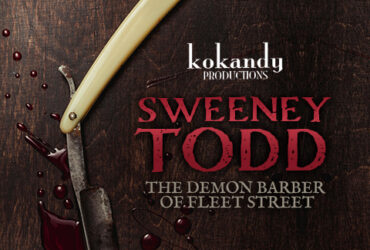