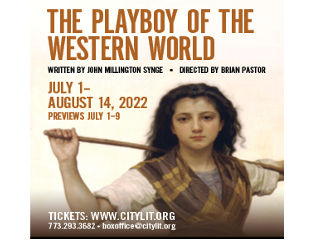 Columbia College Chicago Theatre Department alums are in the cast and production team of The Playboy of the Western World, the classic Irish comedy by J.M. Synge, presented by City Lit Theatre July 1 through August 14. The dark comedy, whose 1907 premiere triggered rioting in Dublin, concerns a rural Irish youth who wins celebrity and notoriety when he claims to have killed his father with a shovel. He beomes a local hero — until the old man shows up, very much alive, with a bandaged head and a blazing temper.