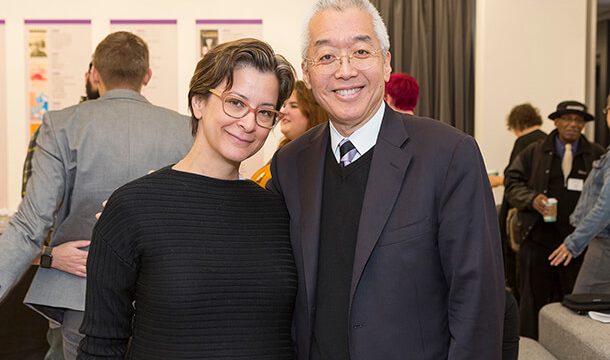 October 19, 2018, was proclaimed “Columbia College Chicago Theatre Day in Chicago” by Chicago Mayor Rahm Emanuel on the occasion of the first-ever Columbia College Theatre Reunion Weekend on October 19 and 20, 2018. The event, organized by the Columbia College Chicago Theatre Department and the college’s office of Development and Alumni Relations, drew alumni and supporters of Columbia College‘s Theatre program to celebrate the reopening of the beautifully renovated Getz Theater Center of Columbia College, located at 72 E. 11th St. in Chicago’s South Loop. The weekend kicked off with a gala October 19 performance of The Penelopiad, the first production in the Getz Theater Center’s splendid new Courtyard Theater, at which Mark Kelly HDR ’17, Chicago’s Commissioner of Cultural Affairs and Special Events, presented Columbia College President Kwang-Wu Kim with Mayor Emanuel’s proclamation “in recognition of the indelible contributions that Columbia College’s Theatre Department has made to theatre in the City of Chicago, across the United States, and around the world.” 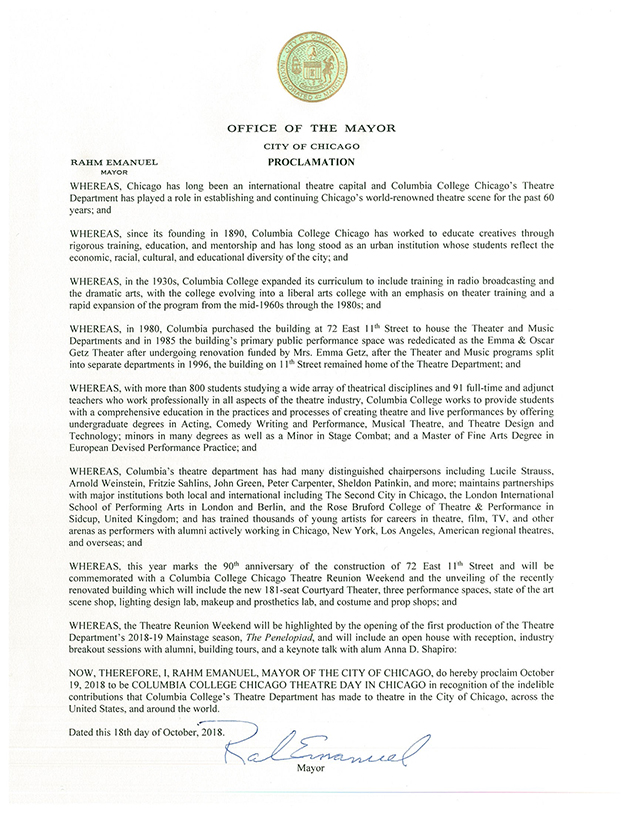 The Theatre Reunion weekend continued on Saturday, October 20, with a day of panel discussions featuring alumni, faculty, and students, along with performances, networking, reminiscing about the past, and planning for the future. The day was highlighted by welcoming comments from Columbia College alumna and Honorary Doctorate Recipient Anna D. Shapiro ’90, HDR ’15, artistic director of Chicago’s celebrated Steppenwolf Theatre. Also on hand for the weekend was Jim Jacobs HDR ’14, coauthor of the hit musical Grease and benefactor of the Jim Jacobs Musical Theatre Scholarship at Columbia College, and members of the family of the late philanthropist Emma Getz, whose generous donation to Columbia College supported the establishment of what is now the college’s Getz Theater Center.

Here is a selection of photos from the weekend; to see more pictures on the Alumni Relations office’s Facebook album from the event, click here.