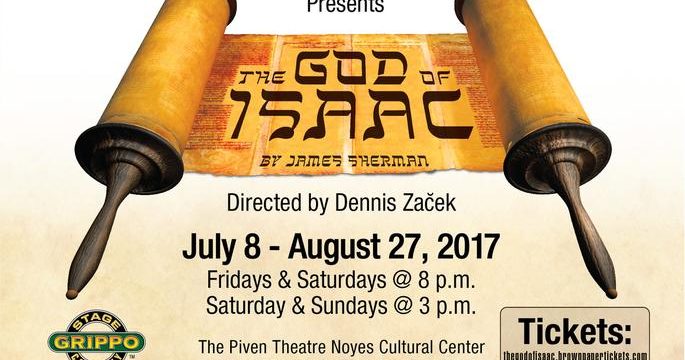 The play, a hit in its 1985 premiere at Chicago’s Victory Gardens Theatre, is Sherman’s semi-autobiographical account of a young American Jew searching for his Jewish identity in the wake of a threatened neo-Nazi march in the Chicago suburb of Skokie in 1977. The new production is helmed by Dennis Začek, who directed the play’s world premiere at Victory Gardens, the beginning of a decades-long collaboration between Sherman and Začek.

The God of Isaac focuses on Isaac Adams, a second-generation American Jew, as he learns of plans for a neo-Nazi group to stage a demonstration in Skokie — a real-life 1977 event that inspired the play. Wondering what, if anything, his involvement should be, Isaac ultimately comes to terms with his heritage, his mother, and himself. The God of Isaac has enjoyed productions worldwide.

“When I opened the play in 1985, the idea of a neo-Nazi group marching in Skokie was deeply disturbing, particularly since the community was heavily populated with Holocaust survivors at the time,” comments Sherman. “I never imagined that 30 years later the questions raised in the play would suddenly feel so resonant and topical, with white supremacist and neo-Nazi groups once again making news headlines nationwide.”