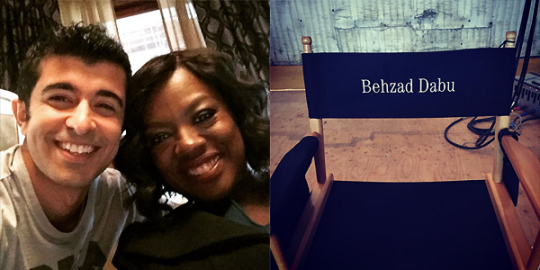 Columbia College Chicago Theatre Department alumnus Behzad Dabu ’08, a graduate of the Theatre Department’s Acting Program, is featured in a recurring role on the 2016-17 season of the ABC TV series How to Get Away with Murder. Behzad Dabu (center) in the ABC TV series “How to Get Away with Murder.”

The show, now in its third season, stars Viola Davis as a university law professor and criminal defense attorney who selects a group of her best and brightest students to assist with cases at her firm. Dabu is joining the show in the role of Simon, described by the show’s creator Peter Nowalk as “kind of a really fun addition to the group . . . sort of an antagonist for our little cult of students.” Dabu made his debut on the series in its 2016-17 season opener on September 22.

Dabu is also a former employee of Columbia College’s Admissions office, where he worked as a recruitment officer before devoting himself full time to his acting career. How to Get Away with Murder airs Thursdays at 9 PM Central time on ABC.