Columbia College Chicago Theatre Department alumni are participating in Kafkapalooza, a festival of new plays, running August 14-22 at Collaboraction’s Pentagon Theatre in the Flat Iron Arts Building, 1579 N. Milwaukee, in Chicago’s Wicker Park neighborhood. Presented by the First Floor Theater, the two-week event features eight short works by Chicago writers who have found inspiration in the life and work of early-19th-century German author Franz Kafka, known for his nightmarish imagery, gallows humor, and sharp critique of modernity. Presented back-to-back, these new plays offer “a diverse, intelligent, and darkly comic exploration of urban life, the dangers of bureaucracy, and the power of fable and dream,” according to First Floor Theater. All eight plays in the festival will be performed every night, divided into two acts with a short intermission. Playwright Skye Robinson Hillis, a graduate of the Theatre Department’s Theatre Directing program, is the author of Fugitive Awareness, one of the short plays featured in the event. 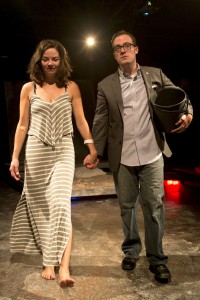 And actor Pat Whalen, a graduate of the Theatre Department’s BA Program in Acting, is in the cast of another play, Ike Holter’s Red Right Hand.

Tickets for Kafkapalooza are $15. For a complete list of plays and performance times, and to order tickets, click here.