Jackalope Theatre, one of Chicago’s “must-watch” young ensembles, begins performances of its next production, Four, on Thursday, February 19, at Broadway Armory Park, at 5917 N. Broadway in Chicago’s Edgewater neighborhood. The cast includes Columbia College student Michael Kurowski and former student Daniel Martinez, and the creative/production team also boasts the talents of several Columbians. Tickets are only $5 for previews: Thursday-Saturday, February 19-21, at 7:30 PM, and Sunday, February 22, at 3 PM.

Press opening is Monday, February 23. The show runs through March 28. Tickets are available via jackalopetheatre.org. During the run, student and industry tickets are $15; general admission tickets are $20.

Written by Obie Award-winning playwright Christopher Shinn (Teddy Farrara), this 85-minute one-act concerns two couples–one gay, one straight–connecting on a lonely Fourth of July in Hartford in 1996. Kurowski plays June, a 16-year-old white boy, who sneaks out for his first homosexual tryst with a closeted, married black man he’s met over the Internet. Martinez plays Dexter, a 20-year-old low-level drug dealer on a date with a female high-school student. “In and around the city, as America celebrates its independence, these two couples get to know themselves and each other, as they navigate the journey from strangers to intimates. In the stark landscapes of movie theatres, fast food restaurants, darkened churches, parking lots and public parks, they grasp for connection but reveal the limits of desire, and the possibilities for transcendence,” according to Jackalope’s publicity materials.

Columbia College Theatre alumni on the show’s creative/production team include scenic designer Mike Mroch, costume designer Delia Ridenour, assistant director Erin Shea Brady, master electrician Claire Sangster, scenic artist Zoe Claster, and “basketball consultant” Behzad Dabu. Jackalope’s artistic director is alumna A.J. Ware.
Jackalope was founded in 2008 by Columbia College Theatre seniors A.J. Ware, Kaiser Ahmed, and Gus Menary as an outgrowth of a spring class project in which they were assigned to create a fictional theatrical production company. The project went so well that they decided to make their project a reality, and that summer Jackalope Theatre Company was born. Now in its sixth season, the company produces three full-length plays and a one-act  festival of new plays every year, as well as supporting artistic programming of every discipline at The Frontier, its storefront home in the Edgewater neighborhood.
Jackalope’s website declares: “We stage productions of newly developed and established American works. We create theatrical experiences that encourage our audiences to consider what it means to be American, by telling stories that speak to our nation’s diversity of cultural backgrounds. We also seek to inspire a new generation of theatre artists through our classes and community events.” 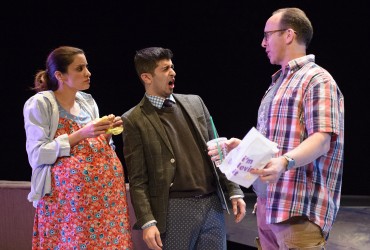