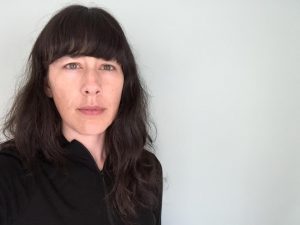 Fear Icons, by Kisha Lewellyn Schlegel, examines how fear is created and soothed in modern society by adopting the personal essay form to explore the lives of public and historical figures. Her approach is encapsulated by a Goethe quote she uses, “we can only portray rather than explain.” In other words, rather than a theoretical analysis of the people and things that cause fear, Schlegel employs a variety of creative portrayals including drawings, letters, and diary entries, intermixed with references and quotes from literature and feminism. As a result, we have a collection of 20 essays that move lyrically and creatively among a wide range of subject material, touching on everything from Bin Laden to Facebook, while connecting these seemingly disparate ideas into a central thesis of the role fear plays in our daily lives.

For example, her essay “Trump” is arranged as a series of diary entries beginning prior to the election and ending on election night. She struggles with her six-year-old son’s honest reaction that he “hates him” and with the inadequacy of language to describe her feelings. She states, “What can I say when I don’t believe that love will keep us safe? How can I talk about how much I hate this man without making more hate? . . . What language can disrupt the language of fear without repeating its error?” The theme of “language” continually reappears throughout this essay, as Schlegel discusses the language of oppression, the language of love, the language of the “literary mothers” who have come before her, and, when all else fails, the scream.

The remaining essays work in a similar manner, creatively employing wordplay and metaphors while remaining accessible to readers. Dolly Parton’s voice “is a honey she knows how to pour,” and while watching her son play, Schlegel writes, “I become a quiet telescope. I watch him move the light.” These essays are thought-provoking as they probe serious subject matter, but Schlegel doesn’t use difficult vocabulary to make the visuals more intense. Instead, readers are impacted by the meaning of her thoughts, ideas, and the feelings behind them. For example, rather than create a generic exploration of the impact the Newtown shooting had, the essay “Gun” chronicles various inklings of fear and anxiety that Schlegel experiences in the days after the shooting. While watching her son play he is so alive that she “turned away so I wouldn’t think of dead children while looking at my living child” and later in a darkened movie theater she “turned back to the screen only to feel the small tick of nerves behind my ears. I felt a vibration and suddenly believed that someone nearby was getting ready to stand up and do something.”

Her vivid descriptions allow readers to connect to Schlegel by reminding them of similar experiences of imagining the worst. How many of us have walked just a little bit faster when it felt like someone was too close, or have planned out exactly how to respond to an active shooter or other tragic situation? By reaching out to a larger, more general population rather than ivory tower academics repeating the same tired phrases to each other, Schlegel aims to encourage Americans from every part of the country to investigate, examine, and discuss their own feelings through the wealth of avenues available to them. Overall, Fear Icons is a timely, thorough, and understandable exploration of both Schlegel’s personal feelings and the larger impact of fear on our society.

Cheryl Fitzgerald is a Master’s in Public Health graduate seeking a career that will allow her to use her writing skills. Currently considering PhD programs, she is interested in how history, politics, and education create an impact on public health.