Laura Anderson Barbata enlisted the powerful arts of papermaking and theater to draw attention to the tragic life and death of Julia Pastrana, a 19th-century opera singer and dancer with a rare genetic condition that caused her human dignity and rights to be set aside in favor of the success of a side show carnival. 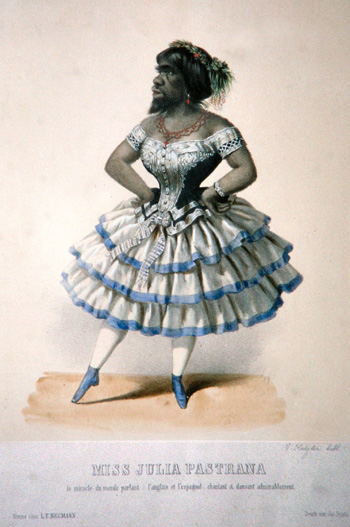 Born in 1834 in Sinaloa, Mexico, Julia Pastrana suffered from hypertrichosis lanuguinosa with gingival hyperplasia, a condition that caused excessive hair growth all over her body. Although Pastrana, a mezzo-soprano and a dancer, was an accomplished artist and solo performer, she was “sold” as a young woman, to be taken on tour and exhibited as “The Ugliest Woman in the World.” She died in childbirth, but her embalmed body and that of her child continued to be exhibited for more than 20 years after her death by her husband. Until now, Pastrana has been part of the Schreiner Collection of the University of Oslo in Norway. Barbata, through her work with the Texas performing arts group Amphibian Stage Productions, discovered the history and tragedy of Pastrana’s life. Barbata initiated correspondence with the University of Oslo and the Ethics Committee of Oslo to address the moral questions of having Julia Pastrana in their collection. She also organized a memorial mass for Julia, the only humanitarian gesture she had received after her death. Barbata hoped that by initiating a dialogue about Pastrana’s life journey, it would encourage the Schreiner Collection to begin the inquiry that ultimately led to the release of her remains to Mexican authorities.

In a February 7, 2013 ceremony at the Oslo University Hospital, a representative of the Institute of Basic Medical Sciences in Genome from the University of Oslo will transfer the custody of Julia Pastrana’s body to Mexico by way of Barbata and Oxford University forensic anthropologist and archaeologist Dr. Nicholas Márquez-Grant. Following the ceremony, Barbata will accompany Julia’s remains back to Sinaloa, Mexico, where she will be buried in her homeland of Sinaloa de Leyva.

Barbata says “In 2003 Amphibian Productions invited me to collaborate on their New York production The True History of the Tragic Life and Triumphant Death of Julia Pastrana, the Ugliest Woman in the World. I found this true story of a Mexican indigenous woman´s life so powerful that I felt it was my duty as an artist to do all that I could to remove Julia Pastrana from the Schreiner Collection and return her to her homeland for proper burial. I initiated this project at OCA: Office for Contemporary Art, Norway in 2004. For 179 years, Julia´s life and story have been deeply connected to the violation of her human dignity and her rights. This humanitarian action reinstates her to the full complexity of her history and invites us today to ask ourselves necessary ethical questions about our society and its constructed values.”

Amphibian Stage Productions in Texas staged a new production of the play about Julia’s life and death this past October, right after the announcement that Pastrana’s remains would return to Mexico. The production, performed entirely in the dark, garnered numerous awards in the Dallas-Fort Worth area, shedding light on this humanitarian issue for Texas audiences. 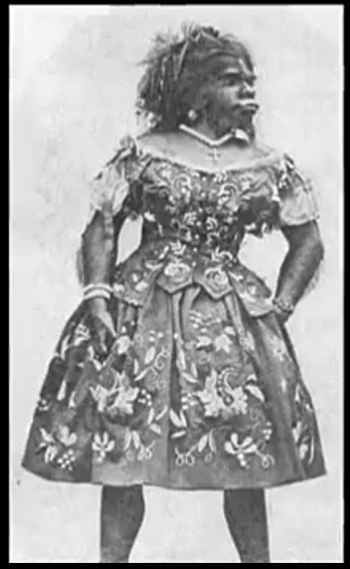 As part of the repatriation project and journey, Barbata has initiated “A Flower for Julia,” a campaign inviting people touched by Julia’s story to send flowers for her burial. (Click on the link and put in the search box the word Julia to be taken to the flower site.) Donors may make a gesture by sending just one flower, or hundreds. “The florist will not make any profit,” says Laura. “After the burial, all the flowers that have been sent would be placed one by one on her grave by all in attendance. It will be a simple collective artistic gesture to welcome and pay tribute to Julia, and give closure. My dream is to see her grave covered with thousands of flowers!”

While working in 2012 at CBPA, Barbata created a number of works in paper that referenced Pastrana, as a personal response to the feminist and humanitarian issues inherent in Pastrana’s story. 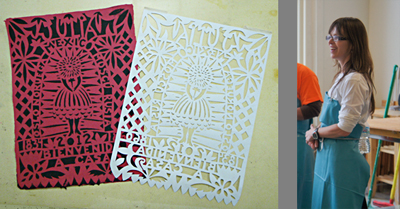 Barbata and some of the work she created at CBPA in homage to Pastrana.

Going forward, Barbata is continuing to explore creative ways to honoring the memory of Pastrana. She is in conversation with the National Opera and Ballet of Oslo about composing and mounting an operatic work about Julia Pastrana. When she travels to Oslo this February, she will be meeting with the National Opera and Ballet to follow up on the discussions, and initiate collaborative project planning which will involve the artists and musicians of Apparatjik, a multidisciplinary artist-collective founded in 2008 by 4 acclaimed musicians – Guy Berryman of Coldplay, Magne Furuholmen of a-ha, Jonas Bjerre of Mew, and music producer Martin Terefe. A literal translation of the word Apparatjik is “an agent of the apparatus.” The group took their name from the Russian word apparatchik, used to describe “people who cause bureaucratic bottlenecks in otherwise efficient organizations.” Apparatjik has performed at numerous museums and international art and music festivals around the world.

Also in the works is a book and a documentary about Pastrana directed by Dignicraft, the directors and producers of Brilliant Soil, an award-winning documentary on the use of toxic lead in traditional pottery, and efforts to change this by encouraging and promoting production with lead-free glazes.