The winter break and J-Session is a break for many Columbia students, but for second-year media arts MFA Chelsey Shilling, it was a time to take theory into practice. She spent the 2013 winter break at work on Stadium Devildare, the new performance piece by international writer and artist Ruth Margraff. The performance is running through February 23 at the Red Tape Theater on Chicago’s near north side, and Shilling designed the multiple projections that are integral to the piece. 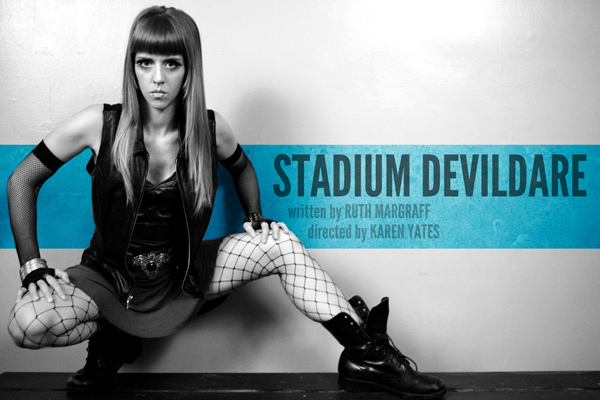 The Chicago premiere presents hand-to-hand combat and fighting that questions love, power and loyalty against the backdrop of world war. At various times during the performance, viewers are thrust suddenly into an extreme version of reality, where they face elimination. Stadium Devildare is laced with what playwright Margraff calls “cheatcodes,” which need to be deciphered competitively throughout the performance, in order to access the deeper levels of meaning. One of the key “cheatcodes” is revealed in the segment “The Greater Silhouette is Falling Open and Above You,” where Shilling’s projections play a crucial role.

“Chelsey’s projections have a haunting, surveillance quality that fits the vast, reality program context of my play,” says Margraff. “Her work lets the greater real world (war, mass weaponry, cultures of self and patriotism) fall open in the background, as the contestants fight for survival in its ominous silhouette.  Her work reminds me of the artist Sadie Benning and her early Fisher Price pixelvision camera work. Chelsey’s projections have that nostalgic quality of something being almost remembered and then one day, the recognition bowls you over.”

Stadium Devildare runs through February 23 at Red Tape Theatre, 621 West Belmont Avenue. For more information on the work and to but tickets, click here.