Krista Franklin’s work is part of a two person exhibition at Dittmar Galllery at Northwestern University. Krista is a first year student in the Interdisciplinary MFA in Book and Paper.

Tech Noire: The Art of Stephen Flemister & Krista Franklin explores ideas of the black body and identity through digital and futuristic landscapes. Examining the modern self-made identity, Stephen Flemister’s artwork encompasses surveillance culture, the “dark side” of the digital, and the collision of the public and the private spheres. Krista Franklin’s mixed-media work repositions blackness through an Afrofuturistic lens, and plays on science fiction and speculative literature and cinema as well as the iconography of film noir. 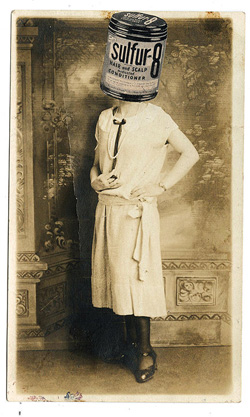 “A Girl Has to Keep Up Appearances (Sulfur-8 Head)”