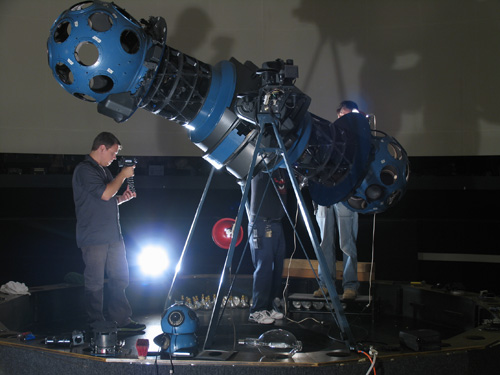 Chicago’s Adler Planetarium is beginning renovation of their Skydome theater this September and Interarts MFA Candidate Nicholas Sagan will be there to document it all! As part of an independent study project, he will be on location throughout the progress of the demolition and reconstruction which expected to be completed May 2011.

The Planetarium was founded in 1930 by Chicago businessman Max Adler after learning of the impressive technology and design that went into the original Zeiss projector. In 1967, the projector was replaced with a Zeiss Mark VI and this fall the entire interior dome screen and main projector will be replaced, updating the theater by installing an Omnimax-style projection screen and an HD projector. This move represents not only a shift in technological methods for sharing new information about the universe in which we live but also of the progression of thought that the universe is much larger than what we see when we look at the sky at night.

The words Mr. Adler spoke at the public opening back in 1930 still have resonance today:

Chicago has been striving to create, and in large measure has succeeded in creating, facilities for its citizens of today to live a life richer and more full of meaning than was available for the citizens of yesterday…The popular conception of the Universe is too meager; the Planets and the stars are too far removed from general knowledge. In our reflections, we dwell too little upon the concept that the world and all human endeavor within it are governed by established order and too infrequently upon the truth that under the heavens everything is inter-related, even as each of us to the other.

For more information on the Adler Planetarium and the renovation process, please visit their website at: http://www.adlerplanetarium.org/.

To follow this and other projects by Nicholas, please visit: http://nicholassagan.wordpress.com/category/project-progress/