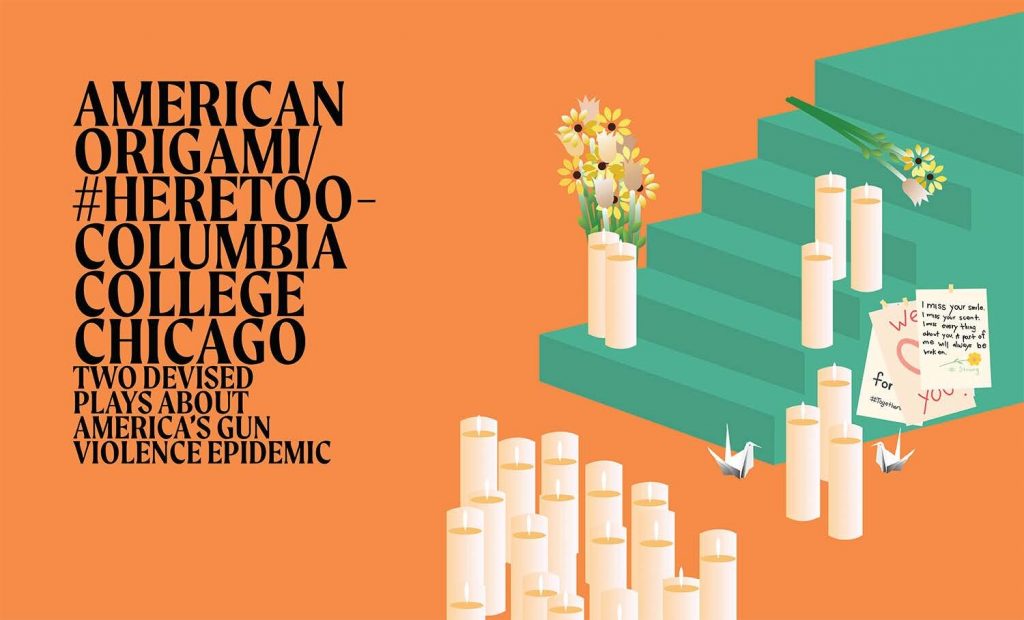 The Columbia College Chicago Theatre Department proudly launches its 2021-2022 Mainstage Season with an exciting collaboration between the Theatre Department, Columbia College’s Museum of Contemporary Photography, the national theatre/activism initiative #HereToo, and the internationally acclaimed Tectonic Theatre Project: American Origami/#HereToo-CCC, a program of two devised plays in dialogue about America’s gun violence epidemic. The production opens Friday, October 15, and runs through October 23 in Studio 404 of the Getz Theatre Center of Columbia College, located at 72 E. 11th St. in Chicago’s South Loop. There are preview performances Wednesday and Thursday, October 13 and 14. For a full cast list, show times, and tickets ($10-$15), click here. 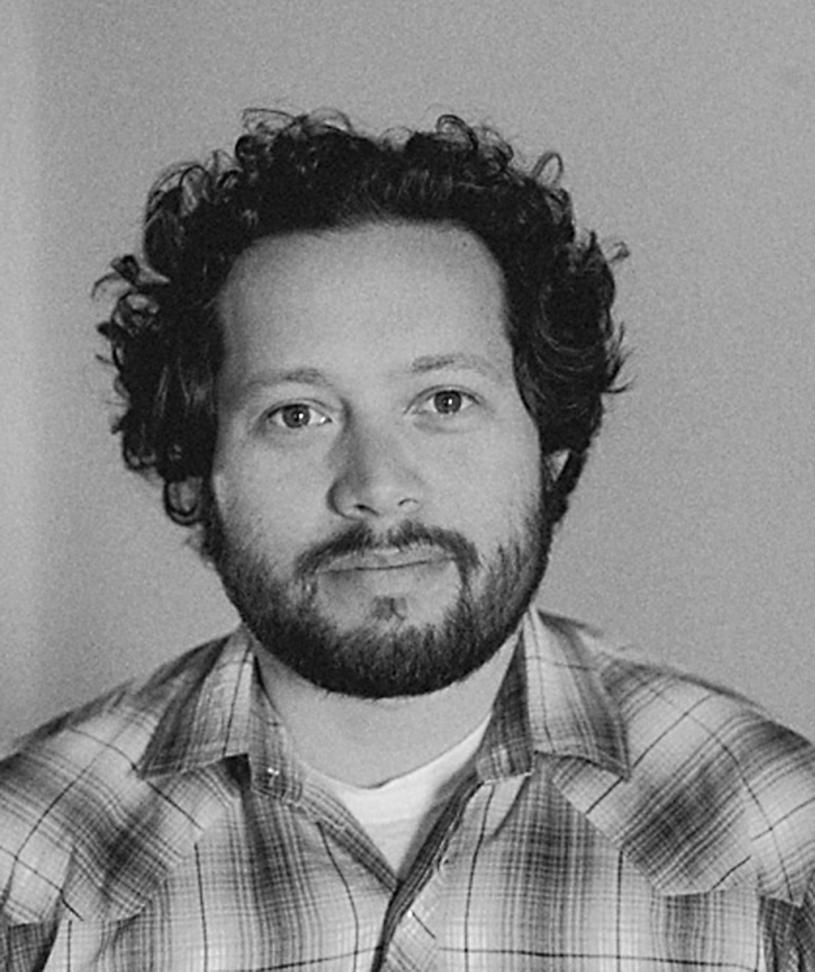 American Origami/#HereToo-CCC is a program of devised theatre created by the full companies of the two plays in collaboration with guest artists Barbara Pitts McAdams and Jimmy Maize, who are co-directing the production with senior Columbia College Theatre Department Theatre Directing program student Ashley Keys, and photographer Andres Gonzalez, whose 2019 book American Origami — an examination of mass shootings in American schools that interweaves first-person interviews, forensic documents, press materials, and original photographs — is the inspiration for the first play on the double bill. Guest artists McAdams and Maize are members of the Tectonic Theatre Project, the internationally acclaimed company that created such internationally acclaimed works as The Laramie Project, the Pulitzer Prize-winning Broadway hit I Am My Own Wife, Gross Indecency: The Three Trials of Oscar Wilde, and the Tony Award-winning 33 Variations. McAdams and Maize are coauthors (with Moisés Kaufman, Leigh Fondakowski, Greg Pierotti, Andy Paris, Kelli Simpkins, and Scott Barrow) of the book Moment Work: Tectonic Theater Project’s Process of Devising Theater.

American Origami/#HereToo-CCC complements a photo exhibit titled American Epidemic: Guns in the United States, on display through February 20, 2022, at Columbia College’s Museum of Contemporary Photography, located in the college’s Alexandroff Campus Center at 600 S. Michigan, Chicago. In this exhibit ten artists — including Andres Gonzalez — examine the role guns play in structural violence, poverty, systemic racism, and an increasingly militarized police force. Using the photographic medium, the artists provide a nuanced exploration of the way in which guns are yielded in this country, including the politicization of trauma, public mourning (and the rote political refrain of “thoughts and prayers” in response to gun violence), and a host of other issues laid bare by this uniquely American plight.

“About a year ago, Karen Irvine of Columbia’s Museum of Contemporary Photography brought an idea to [the Columbia College Theatre Department’s] then-chair Carin Silkaitis,” explains Susan Padveen, the Interim Chair of the Theatre Department, in her program note. “It was pretty open-ended – would we be interested in working with some members of the Tectonic Theatre Project, a company dedicated to devising theatre, on a piece coming out of Andres Gonzales’ book of interviews and photographs, American Origami. That’s where we started, thinking we might read some of the interviews out loud in the gallery or record some pieces to play during the exhibition. What we have come to through lengthy discussions, reading, rehearsals, interviews and research are two new plays, both in discussion with each other about gun violence and youth activism. I am so proud of our collaboration, and can’t wait to share the work of the creative team with you.” The Columbia College Theatre Department’s production of American Origami/#HereToo-CCC is part of a national theatre initiative called #HereToo, which amplifies young activists’ voices through performance. Inspired by the 2018 national March For Our Lives, the #HereToo team (including McAdams and Maize) gather stories about gun violence and archive and share these stories with theatre makers who, in turn, make devised performances about these issues as they impact their own communities, using the Tectonic Theater Project’s “Moment Work” system of theatre-making. As co-director Barbara Pitts McAdams writes in her program notes for the show:

“On March 24, 2018, inspiring young Chicago activists spoke at the national March For Our Lives (MFOL) in Washington, D.C., alongside survivors of the February 14, 2018 shooting at Marjory Stoneman Douglas High School in Parkland, Florida. MFOL set in motion a wave of youth activism around the country. And while young activists in Chicago (and New York, and other places) have been working in their own communities for decades, other teens were getting their first taste of activism as they organized 17-minute high school walk outs (17 minutes for the 17 Parkland victims). Jimmy Maize and I had a strong hunch that we needed to make a play that would honor survivors and amplify the voices of these young activists. We soon realized gun violence and prevention activism is so community specific, #HereToo became a series of regionally specific plays. . . . While the gun violence epidemic can be a divisive and complex issue, the engagement of young people is simply inspiring. #HereToo is their story, in their own words, interpreted and performed by a company of young theater makers. [The] cast and production team at Columbia College interviewed peers, gathered source material, wrote original moments and interviewed young activists working for restorative and transformative justice. Their integrity and talent astonish me.

“In our rehearsal process, the ensemble creates theatrical moments employing all the elements of the stage (projections, movement, props, costumes, lighting, sound cues, voice, song, and many more). . . . #HereToo will continue to have unique productions around the country. The content (moments) will vary, as each community has its own stories to tell about activism and gun violence. #HereToo-CCC is our first Midwest version, joining #HereToo-Penn State on the East Coast and #HereToo-WWU (Bellingham, Washington) in the West. All the interviews and research gathered for these productions will be added to an online, open-source portal, to pave the way for future productions, and to create an oral history archive documenting this moment of transformation in our culture.”

For more information and tickets to American Origami/#HereToo-CCC, click here.

Click here for a video about the #HereToo project. Columbia College Chicago Getz Theatre Center SAFETY PROTOCOLS: In the interest of keeping all our community safe we are asking all audience members to:

* Scan-in with a current student, faculty, or staff College ID.

* OR Show proof of vaccination for COVID-19, or of a negative test result, taken within the previous 72 hours.

* AND Wear a mask at all times when in the building.

Thank you for your cooperation with these safety protocols. Please be advised that the personnel at the theatre are not empowered to waive these requirements.