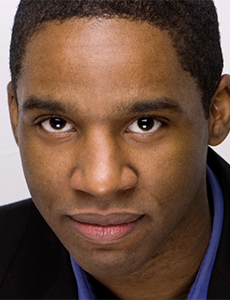 Columbia College Chicago Theatre Department alumnus Michael Aaron Pogue ’06, a graduate of the Theatre Department’s BA Program in Acting, is featured in Todd Kreidler’s play Guess Who’s Coming to Dinner, running March 15-April 15 at Court Theatre in Chicago’s Hyde Park neighborhood. The play is adapted from the screenplay for the Oscar-winning 1967 motion picture about a wealthy elderly white couple’s conflicted reaction to the news that their daughter intends to marry a black man.

Pogue plays the daughter’s fiance — a role created onscreen by Sidney Poitier. Explaining why he adapted the original screenplay for the stage, Kreidler explains that “[the 1967 film] literally brought the issue of race into the home, both in the storytelling and thematically. Approaching it today I wanted to take the opportunity to talk about and engage in the attitudes of 1967, but in a way that was for the 21st Century.”