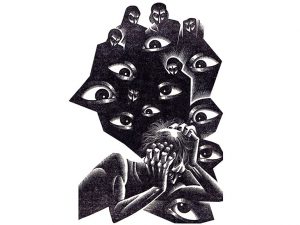 Like most artists, I was very introverted in high school. Despite dealing with my mother dying from cancer, having serious hormonal issues, and not being born into a middle-class family like most of my peers, I tried to assimilate somehow. Who am I kidding? I couldn’t blend in even if I was a chameleon in the rainforest. I was one of the tallest girls in my class. My hair was long but the hair on my body was longer. I didn’t have new outfits to model every day. I didn’t go to school events or birthday parties. I didn’t have parents to come to meetings. I hated gossip. I didn’t drool over the boys in the hallways. I sucked at sports and singing (which is what our school was famous for). Basically, I was a bully’s paradise.

The one talent I had was writing. I knew I wanted to win the Nobel Peace Prize in Literature like Toni Morrison or become the first female music mogul but my low confidence made me lose my appetite to fulfill my dreams.

See, what had happened was one day in math class, I was just minding my own business. The teacher, Mrs. Hudson decided we should try to bond as a group. She told us to imagine our biggest goal and how to make it a larger vision. “If you want to be a doctor, What kind of doctor? Do you want your own practice? Do you want to help those in other countries?” I felt my dream was substantial so I didn’t need to expand it.

I wrote it down because she was staring at me. Nobody was going to find out, anyway right? Wrong. She called on me first. I didn’t have a backup plan so I talked about how I wanted my own record label and become a best-selling author. When I finished, a girl sitting behind me said, “You write like a third-grader. Ain’t nobody gonna read that shit!” Of course, everybody laughed, and the teacher tried to move on but failed miserably. This wasn’t my first or last encounter with criticism, but it was embarrassing. I didn’t stop writing. I just chose not to share my thoughts in a public platform. I passed up opportunities like talent shows and politely told my family no when they wanted to read my work.

After graduating high school, I listened to other people and decided to pursue more practical fields. I went to the University of Illinois at Urbana-Champaign for Mechanical Engineering. I dropped out after two years and tried nursing. I didn’t get into the program because the waiting list for out of district students was too long, but I met the requirements to enter the Surgical Technology program. After a year, my financial aid wouldn’t cover tuition, so I had to be satisfied with an Associates in Applied Science.  Four years later, after growing tired of my subconscious screaming at me, I applied to Columbia College for Creative Writing in Fiction with a minor in Intellectual Property Management. I’m excited about my future, and graduation will taste so good, you would think Kayne West baked cakes.

If I had the opportunity to meet my fourteen-year-old self (hopefully, before the dreadful math class), I would be on the new episode of Intervention. I would tell myself I’m addicted to validation, and here’s how we are going to fix it:

1) Remember those people who made you feel like shit? You will barely see them after you graduate and Facebook will have better blocking options.

2) It’s okay that you want to know what your family and friends think, but don’t depend on their opinions. Your instincts will take you places you can’t imagine.

3) If you are afraid to do something, do that shit. It won’t kill you. However, when your best friend asks do you want to smoke weed for the first time, cancel the meeting and take a nap. Just trust me.

4) Don’t be so hard on yourself. You are a human with emotions who is still learning about life. Nobody is perfect, and if they think so, leave them alone. You can’t help them.

5) Think bigger. You won’t lose anything reaching for the stars, but you will waste time trying to count them.

Would I do everything all over again?

I know what I would have done differently, though.

Who wants to die living a life somebody else chose for them?

The Nonfiction of John Schultz

Write What You Know