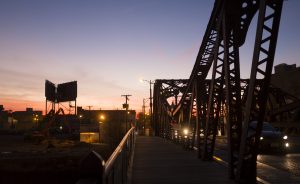 Walking in Manhattan and DC is a point-to-point experience. You walk to the train, subway in one, metro in the other, then from the station to work, to a sale, to a concert, in short to get somewhere. I can’t recall ever thinking about my health, not about the carbon monoxide or how many pounds I must be shedding. I wish I could say I always hated driving, sitting in traffic dead stopped on the Cross Bronx Expressway or at a green light in the theater district while masses of pedestrians block all vehicular turns, or the crazy weaving drivers. I suspect, though, were my parents alive, they might find some stray example from my adolescence to contradict me. I can hear my sister, now living in Japan, say, “But I thought you loved driving at night listening to baseball on AM stations?” My brother probably would not throw in my face the job he got me as a taxi driver, the first woman driver in the now defunct New Mall taxi company where he worked. It was certainly better money than most summer jobs I’d had: plucking the pin feathers of chickens and rolling pigs in blankets at a kosher catering service; mother’s helper for three kids in upstate New York, jobs that would be touchstones of the traditional spheres of grown-up womanhood that I would forever reject: cooking, housekeeping, and raising a child.

I’ve always liked city walking, partly because it’s not productive—to keep from being trampled, you have to be constantly aware, not think much about anything else, or even get lost in a daydream. I’m still shocked when I see pedestrians in New York on cell phones or hooked into music. Could they really be from THE CITY? Were I not involved in the practice of quickly moving around people without touching so much as a flaring sleeve, I’d probably try to guess from where. That blond? Iowa. The super tall guy? Illinois. Accents make it easy. Not to mention all the different languages. Tourist? Diplomat? First Generation? Light change. Keep moving.

DC is more complicated as a walking city. The patterns are different. The streets are wider. The lights countdown how many seconds left to cross legally. Cars make right turns on red. Really?!

Mind you, DC is supposed to be one of the most walking friendly cities in America. How that can be with cars creeping into the cross walk, drivers thinking there’s only one direction to consider—the one from where other drivers are coming into their intended merge lane—and the illuminated second timer for crossing the widest streets being half those of the smallest ones.

What probably makes DC a walker’s paradise are the areas specifically set aside for recreational walking, not the sidewalks of the city itself. It’s a place where people go to walk: the C&O Canal nudging Georgetown, Rock Creek’s up and downs with views of the Zoo entrance and the Kennedy Center, Sligo Creek Trail sliding downhill from Montgomery County to Prince George’s and down the Anacostia to DC. Manhattan has closed off streets to cars—even in Midtown, thank you Mayor Bloomberg—but walking is no stroll in the Park, unless perhaps you have a key to Gramercy.

Not even Central Park is really for those looking to stretch their legs mindlessly. The slow will be trampled on the West Side trail from the Battery and over the GW bridge (I know: I’ve had to dodge bikes and runners with time enough to sneer, even when I jogged, never mind the reaction when I walked, even at my New Yorker’s pace). Everyone knows Central Park’s closed roads have not slowed the pace—not even the famous can keep up, being mowed down is an equal opportunity experience for those with a slower-than-native pace (maybe David Byrne wasn’t fast enough?).

I should, therefore, appreciate the slower pace of DC, and I do, but I still haven’t been able to shake a disinclination to walk just for the heck of it. And when I do find myself walking on one of the trails, usually because I’m too tired to jog round trip, I start imagining things.

Until I moved to the DC area, I appreciated, from afar, those who went for a walk. I knew someone who made the same three mile circuit twice a day every day in one of the college towns where I taught. She picked up trash and stray change. I admired her. Ditto my spouse’s parents who walked with plastic bags in their really, really small Pennsylvania town. Unlike their son and me, they didn’t rant about what slobs people are. They just cleaned up after them. When I’m jogging, I have a special appreciation for such people, and I give them a nod or pant of thanks as I pass.

But something happens when I make the turn, as yesterday, and my not-so-fast jogging pace slows further, to a not-very-fast walk. I have walked New York’s High Line in August faster than I seem able to walk post-run in DC, even when I’m surprised the super-humid air and high temperature doesn’t seem nearly as hot as the forecasters make it sound.

Aware that my legs feel stiff and that the sunblock is dripping into my eyes, I am more conscious than I might be. All my senses are on alert. I welcome the plaintive pewee’s call, growl at the non-stop endless churning of pipes in the creek, and eye each passerby. Usually, the ones in front of me are my goal when I’m walking: pass the strollers, the dog walkers, the mooning couples, those determinedly following doctor’s orders—no competition for a walker trained in NYC to look straight ahead and keep moving.

Lately, this last week of August, I have been passing fewer people. But the grounds for concern are what has replaced that mindless game of person passing.

I noticed this yesterday. An old man—oh, probably my age, in his sixties—with shampoo shiny thin gray hair was walking toward me with a plastic bag. Most people with plastic bags are dog walkers. But he had no dog.

I found myself looking back more than usual since typically I don’t look back at all. I had a sense of his creeping up behind me with that plastic bag and putting it over my face. I hadn’t stopped to consider that most plastic grocery bags, at least the ones I try to use for garbage, have little holes in them, making suffocation unlikely. I didn’t think about the cost-benefit either: Montgomery County and DC now charge people who want to use one of those plastic bags, for whatever purpose. I just thought, huh, he could be my father-in-law, were my father-in-law alive and thirty years younger—not out to kill me, but to pick up trash.

Having stifled that image, another took its place: of a dog walker flinging his plastic bag filled with doggy do and catching me square in my sweaty face.

Like dreams that won’t be redirected, I wonder about the limits of control. Out on the trail, not what I’ll do, but what others could do. After all, I remind myself, the news is full of DC’s rising crime rate and the homegrown terrorist under every bush. Not to mention all the angry people sweating in August while Congress takes a break.

Sometimes these paranoid scenarios make me smile. As they dissolve with each step toward my final destination, and the distance between me and would be assailants widens, I am reminded of my father-in-law. I think of what he might say. He was a shrink, and he died maintaining his admiration of Freud. Me, I didn’t think much of the theories; but I thought this particularly expounder of them was terrific. In his honor, I think I may be having a field day of neuroses. Whether he would have agreed, I’ll never know.

Sandy Feinstein has ridden the El, walked along the Lake, and wandered Hyde Park, though it has been many years. In the meantime, she has published poetry, fiction, and creative nonfiction, the latter, most recently, forthcoming from Isle.